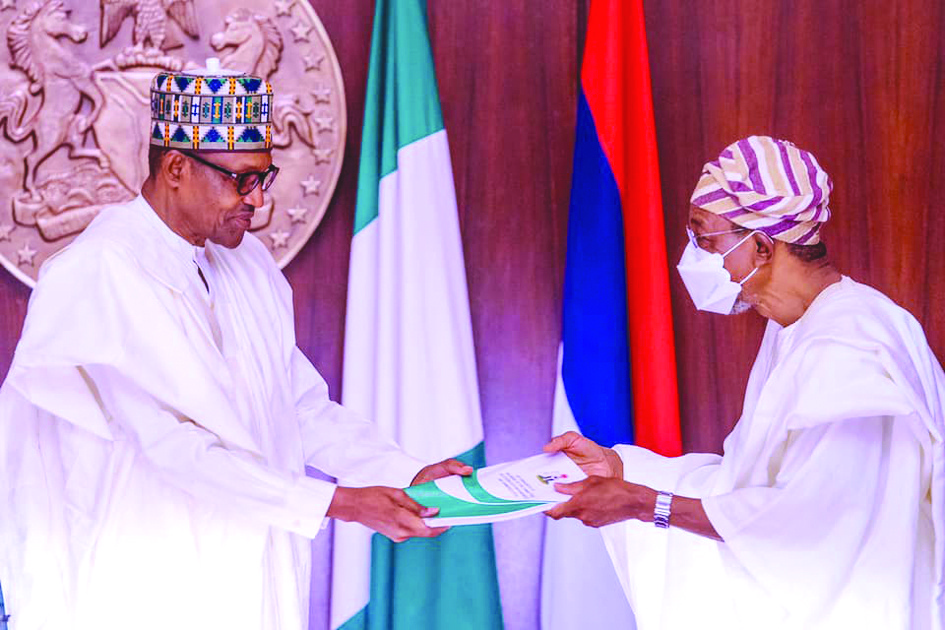 Receiving the report of the committee on Citizen Data Management and Harmonization chaired by the Minister of Interior, Rauf Aregbesola, the President expressed delight that two out of the six areas of concern raised by the United States had been fully addressed.

The committee was set up in February this year to address issues that led to the U.S temporary visa restrictions on Nigerian passport holders.

The suspension, which came into effect on February 21, 2020, does not apply to other U.S visas such as those for official, business, tourism and student travel.

Commending the committee for its patriotic diligence in carrying out the assignment, President Buhari assured Nigerians and the international community of the timely implementation of the committee’s recommendations after due consideration.

‘‘I also note the progress made by Nigeria towards the removal of the visa restrictions as two out of the six areas of concern raised by the United States had been fully addressed, two are substantially satisfied while some progress is being made on the remaining two. I am delighted that this progress, especially the uploading of Lost and Stolen Passport and Travel Documents has been acknowledged by the United States Government,’’ the President said.

The committee had among other things recommended the establishment of a National Criminal Information Management, fashioned after the INTERPOL model, and a National Criminal DNA Laboratory, to aid criminal investigation, administration of criminal justice as well as sharing of relevant information.

President Buhari noted that the implementation of these and other far-reaching recommendations as articulated in the Report will fully address all outstanding issues that led to the visa restrictions.

‘‘An effective Citizen Data Management System is critical for socio-economic planning, improved service delivery and good governance, as well as national and global security. It also has the over-arching benefit of enhancing integrity of the nation’s citizens’ identity instruments for the purpose of information sharing.

‘‘Accordingly, the Committee’s recommendations on the strategies for harmonizing existing databases, improving the infrastructure for the National Identity Database as well as a review of the supervisory mechanism of the National Identity Management Commission would be given serious consideration.

The President also pledged Nigerian Government’s commitment to sustaining the follow-up for the removal of the visa restrictions by the United States and developing a credible harmonized National Identity Data Management System.

President Buhari recalled that the Federal Government’s response to the temporary visa restrictions placed on Nigerian citizens by the United States in January this year, led to the setting up of the Committee to review the restrictions and develop systems and processes that would address the security concerns raised. He said: In consideration of the fact that the concerns raised cast doubts on the credibility of the  nation’s citizen identity data management system, the scope of the Committee’s assignment was expanded to include strategies to harmonize the various citizen identity data held by different Government Ministries, Departments and Agencies. I have gone through the highlights of the Report and must commend the Chairman and members of the Committee for painstakingly carrying out the assignment in spite of the challenges posed by the COVID-19 pandemic. The recommendations as highlighted are capable of addressing the concerns raised by the US Government as well as lead to the development of a reliable national citizen identity data management system.’’

In his remarks, Minister of Interior and Chairman of the Committee on Citizen Data Management and Harmonization, Aregbesola recalled that the body was set up on February 3, 2020, to among others, review the visa restrictions imposed by the U.S and develop systems and processes that would address the security concerns raised.

Another mandate, the Minister said, was to review the status of Nigeria’s numerous citizen identification data, including biometrics, held by different ministries, departments and agencies, and propose strategies for the harmonization of same.

He happily reported that Nigeria had fully satisfied two of the six areas of concern raised by the U.S, two others substantially satisfied, and progress being made on the remaining two.

“It is our hope that the findings, strategies and implementation plans proffered, if fully implemented, will expedite the lifting of the visa restrictions while bequeathing to the nation an enduring identity management system,” Aregbesola.