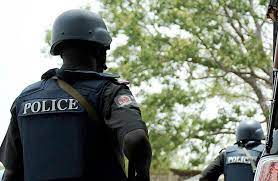 A resident of Lagos State, Mistura Olowu-Oyebayo, has narrated how some officers of the state Police Command allegedly warned her against alighting or stopping at some bus-stops in the state when she visited the Alapere Divisional Headquarters to report how she was brutalised and robbed around Tipper bus-stop, Ketu.

A bewildered Olowu-Oyebayo wondered why those expected to secure the lives and property of citizens would tell her to avoid some bus-stops – Ketu Tipper bus-stop, Church bus-stop, Toll Gate, Ogudu bus-stop, Glass House, including Kosofe area – adding that she was not in doubt that the police knew how deadly those bus-stops were and had done nothing to rid them of criminals.

Narrating her ordeal to our correspondent, Olowu-Oyebayo said she was returning from her office on the Island on Friday, November 25, and owing to the traffic on her way, the staff bus she boarded got to Tipper bus-stop, Ketu, around 8pm.

“It was around five minutes to eight (7:55pm) that I alighted at the bus-stop and I waited for other people to join me as I usually do so that we could move together. I saw two guys at the front and somehow I became suspicious. I asked those we were walking down together if they weren’t suspicious of the two men at our front, but they dismissed my fears and we continued walking.

“Before we knew it, some men started walking towards us from the back and the ones at our front suddenly stopped. Seeing that I was already panicking, those we were walking together started flagging down oncoming cars to see if any would stop to pick us from the place.

“The guys behind us and those ahead now rushed closer to us and one of them started saying ‘Collect her bag, collect her bag.’ On hearing that, I held tight to my bag. Two of them descended on me and began to drag my handbag with me while others were hitting me.

“By this time, those men we were walking together had fled from the scene, perhaps to see if they could get help.

“People were passing by and vehicles were driving by, but no one cared to help me. Instead, people close to the area moved away to a safe distance.

“I held on to my handbag and with my laptop bag on my back, I fell to the ground so that the criminals would not be able to take my laptop bag.

“They dragged me on the ground, pulled my hair, beat and injured me until I could no longer hold on to my handbag.

“By the time the men who were walking with me earlier would return with some other people, the criminals had taken my handbag and fled,” she narrated.

Olowu-Oyebayo said the criminals also went away with her mobile phones and bank (ATM) cards.

She expressed surprise that some traders around the area told her that she should not have alighted around there at that time of the night, adding that the traders said it was a regular occurrence in the area by the “Flower boys.”

She said on getting home later that night, she tried to use her husband’s phone to block her bank accounts but she realised that the money in one of the accounts had been cleared by the criminals.

Having been advised to report the incident at a police station, especially because she lost her ID card and office access card, Olowu-Oyebayo said she visited the Alapare police station as directed by a team of policemen on patrol on the day after the incident.

According to her, the police patrol team had seen and picked up her ID card at the scene of the incident, and they handed it over to her before directing her to go to Alapere police station for an official report.

She said, “On getting to the police station at Alapere with my husband, the officers on duty, after taking my statement, affirmed that they were aware of the criminal activities around Tipper bus-stop.

“To my shock, one of them advised me against stopping at Ketu Tipper bus-stop, Church bus-stop, Toll Gate, Ogudu bus-stop, Glass House, including Kosofe area whenever I’m coming from the office in the evening.

“I was shocked because I couldn’t imagine the fact that the police were aware of these criminal activities and nothing was being done about them. It was also shocking that those who are supposed to protect us are telling us to run away from bus-stops instead of ridding those bus-stops of criminals and making Lagos safe for all.”

She added, “One of the officers said those boys seemed to rub oil or okra on their bodies whenever they went for such operations. The officer, a female, said she had once caught one of the criminals but he slipped from her hands because of what he rubbed on his body.

“Another officer said sometimes the boys would be operating behind them while on patrol and there was no way they could cover everywhere at the same time.

“I wonder who to trust for our security in this state and nation if our police are talking this way. Obviously, there is more to these crimes than meet the eye.”

Our correspondent reached out to the Lagos State Police Command spokesperson, SP Benjamin Hundeyin, regarding the incident and the PPRO said he was hearing such complaint for the first time and promised to take it up.

“This is new to me and I’m hearing it for the first time. We are going to investigate the matter.

“If truly police officers said that, then it’s an indictment on the profession and it’s highly unprofessional, because rather than curb the crimes in those area, citizens are being told to avoid the areas.

“But as I said, we will look into it,” SP Hundeyin said.

“Again, I will like to advise the victim to bring this to the notice of the Divisional Police Officer, because he is responsible for the security in that area. This is why, since I came on board, I’ve continued to publish the phone numbers of all divisional police officers on my social handles and my WhatsApp profile. That’s because we want every citizen to have access to the DPOs.

“And being senior officers, your information is safer with them.