African champions D’Tigress will miss this year’s FIBA Women’s World Cup in Sydney, Australia scheduled for September 22 to October 1, after the Federal Government on Thursday banned the country from attending all international basketball events, following the lingering crises that have rocked the Nigeria Basketball Federation in over a decade.

The Minister of Youth and Sports Development, Sunday Dare, disclosed in Abuja that President Muhammadu Buhari had approved the immediate withdrawal of Nigeria from all international basketball competitions for a period of two years with immediate effect. 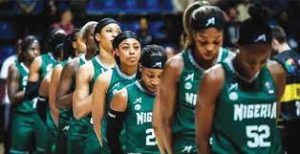 Dare, represented by the Permanent Secretary of the Ministry, Ismaila Abubakar, said a committee would be set up to oversee the administration of basketball in the country.

“Following the unending crisis which has plagued and nearly crippled the development of basketball in Nigeria, President Buhari has approved the withdrawal of Nigeria from all international basketball competitions for a period of two years. This is with immediate effect,” he said.

The minister added that the withdrawal was in order to concentrate efforts by the government towards revamping the sport from the grassroots, as well as domestic leagues, which have become moribund.

“This will also allow for the setting up of an Interim Management Committee to oversee the management and development of the domestic basketball leagues in Nigeria,” he added.

“In issuing the order, the Federal Government reiterates its interest and commitment to the development of basketball in Nigeria as well as huge talents of our youth domestically in an atmosphere free of rancour and squabbles.

“Government, therefore, calls on players, officials, fans, and other stakeholders of the sport to remain calm as it embarks on far-reaching initiatives to reposition, sustain and stabilise the game of basketball.

“This will aid in the growth and success of the sport in the long-term interest of the country,” the minister said.

The men’s team D’Tigers are the first to feel the impact of the ban as they are due to be part of the third qualifying window for the 2023 FIBA Men’s World Cup in Indonesia, Japan and the Philippines, in Kenya from July 1, while the country’s clubs will also not be able to participate in next season’s Basketball African League.

Meanwhile, some of the country’s basketball players have kicked against the ban, saying it will take the sport backwards.

Rivers Hoopers forward, Buchi Nwaiwu, said, “This is not good for our sport. On the local scene we have the Basketball African League, which many Nigerian players are hoping to play in next season. The decision to ban the country from international events will not just affect the sports in the country but set us back,” Nwaiwu said.

Another Hoopers player Victor Dakoru added, “This is a sad day for basketball in Nigeria. Instead of banning the country, they should have used the same energy in solving the problem in the federation. This is sad and I am short of words.”