President Muhammadu Buhari has promised that his government will monitor food inflation in the New Year 2021.

He made the pledge during the 5th Presidential Economic Advisory Conference held at the Presidency on Tuesday. 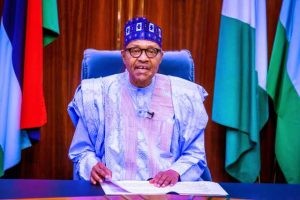 “Already about seven states are producing all the rice we need. We must eat what we produce.” Buhari said.

He also spoke on the achievements made in the agricultural sector as a result of his government’s policy of expanding the national economy by reducing dependence on oil.

Buhari said he wondered how Nigeria could find itself in the economic crisis caused by the pandemic if the country did not embrace agriculture.

“Going back to the land is the way out. We depend on petrol at the expense of agriculture. Now the oil industry is in turmoil. We are being squeezed to produce at 1.5 million barrels a day as against a capacity to produce 2.3 million. At the same time, the technical cost of our production per barrel is high, compared to the Middle East production,” he said.

The conference focused on the challenges facing the national and global economies in the year 2020.