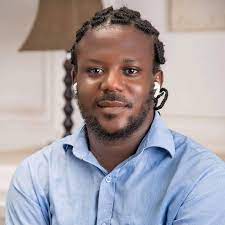 In 2018, as the news started sinking in that incumbent Lagos state Governor, Akinwunmi Ambode would not be backed by Asiwaju Bola Tinubu for a reelection, there was a kind of tension across the state.

In the middle of all that, a relatively unknown name, Babajide Sanwo-Olu was floated. Announced that close to the election year, the All Progressives Congress, APC needed to do something drastic to ensure he became a household name before the election.

One of the drastic steps taken was to spam the entire state with Sanwo-Olu banners and billboards. It’s from one of the billboards that the title of this piece emerged.

This was obviously an attempt to inform the public that this is Tinubu, the famed kingmaker’s anointed.

Omatseye’s vituperations are not new. Anyone of repute that has ever spoken or been at opposing ends of Bola Tinubu would have felt Omatseye’s deep bites.

The picture that the Tinubu-Omatseye relationship paints is that of evening walks where a man is walking a drooling pitbull that’s on a leash.

Occasionally to scare passersby or prevent them from getting too close, the dog owner would jerk the dog’s chain in their direction. The dog would lunge at them and they would scatter in different directions, leaving the dog owner smiling as he continued his walk.

The relationship has been a point-and-kill one where the shot caller points at the target and the executor goes for the kill. One where the pitbull owner whistles and jerks the chain to get the attack dog going.

In attacking Obi, Omatseye continued the series of attacks that started before the APC Presidential primaries with victims like Vice President, Prof. Yemi Osinbajo, President Muhammadu Buhari, Former Governor of the State of Osun, Ogbeni Rauf Aregbesola, the leadership of the Christian Association of Nigeria (CAN), and now, the man standing in Tinubu’s way, Peter Obi.

Omatseye’s piece, “Obi-tuary” is riddled with the same arguments manufactured from APC’s political strategy room and shared gleefully online by the foot soldiers.

In “Obi-tuary”, Omatseye, towing the ethnic bigotry-laced campaign template that the Bola Tinubu campaign has chosen to run, tried to pin Peter Obi to a corner as just a South Eastern candidate that has struggled to get support from other regions.

While that is false as seen from the wide acceptance that Peter Obi has enjoyed across the country, it also fails to achieve what Omatseye hoped that it would.

For one, that those who hitherto wanted out of the Nigerian project are now supporting Obi to win is not the damning indictment that Omatseye was trying to sell.

What it does is show that people wanted out because they were marginalized and made second class citizens in their own country.

They wanted out because of the unmistakable disdain that the Buhari administration has shown the region since it won power.

They wanted out because of statements like the one from the Oba of Lagos, a Tinubu ally and Omatseye’s leash puller about drowning people from the region if they refused to back his preferred Governorship candidate.

It is not Peter Obi or the South East that Omatseye’s ridiculous arguments hurt, it is Tinubu, Buhari and the rest of them to whom Omatseye panders.

If you thought the attempt at connecting dots that didn’t exist was the most comical of Sam Omatseye’s “Obi-tuary”, you are in for a shocker as he was just getting started.

Omatseye took things further by digging up a non-issue and attempting to use it to drive home points that hold no water.

The non-issue was the 2006 allegation that Peter Obi’s emissaries were intercepted by the police with N200 million cash.

By the way, Obi’s explanation of the issue was that it was a genuine transaction. According to him, in a bid to fight kidnappers and robbers in the state, he met with heads of administration in the 21 local governments, where they agreed to buy two vehicles each for the police and another set for local government liaison officers.

All the local government chairmen then issued a cheque for the cars while Peter Obi, in line with his methods, contracted and paid the car dealer himself. The dealer cashed the money and joined the Governor’s entourage to Lagos where he was arrested with the cash.

The car dealer was paid and delivered the cars. The local government chairmen and police got their cars. It was used for exactly what it was meant for.

It’s a non-issue because the matter was not just explained to the public, Peter Obi addressed the state House of Assembly, telling them what the money was for, and they cleared him.

It’s not just that; Peter Obi also petitioned the then Inspector General of Police, Sir Mike Okiro, that while he had given his explanations, he wanted the IGP too to investigate the matter independently and decide if he was guilty or not. He was cleared.

He also explained the issue to the Nigerian Guild of Editors – a body that Omatseye belongs to – when they visited the state in 2006 for their standing committee meeting. They were not just satisfied with the explanations, they commended the work he was doing, and even advised him to blow his own trumpet.

According to the then President of the Guild, Mr Gbenga Adefaye: “It will not be sufficient to keep what you have done in a closet. You don’t light a candle and put it under the table. You need to let the world see and know more about the work you are doing in Anambra. By the time you finish doing that, it would be a kind of mass mobilization of the people at the grass root and on their own, they will be able to come out and decide what direction they want things to go.”

16 years after that admonition, ordinary people who are now aware of Obi’s exploits are spending their own resources and time to campaign for him.

On a normal day, Omatseye’s piece should not be given any relevance beyond the ranting of a paid political influencer, but for the sake of posterity, this blatant assault on truth cannot and must not be allowed to go unchallenged no matter whom the spin doctor is.

Omatseye knows the truth, yet he and the minions from the All Progressives Congress continue to sell the lie because it suits their needs.

They continue to gleefully share that cover of Tell Magazine that accused Peter Obi of stealing N200 million of Anambra State funds without sharing the truth that he was cleared by the police, the House of Assembly, even Omatseye’s constituency, the Editors were satisfied.

For someone whose column is named “In Touch”, Mr. Omatseye appears to be disturbingly disconnected from the truth, or reality for that matter.

Before joining Tinubu’s The Nation as Chairman of the Editorial Board in 2006, Omatseye had maintained a column in The Nation, doing the normal editorial attacks and hit pieces shrouded in concern for the nation which fooled no one as to whose interest the writings were pushing.

In fact, in 2016, one year after President Buhari’s victory and Asiwaju Tinubu’s candidates to the Senate and the Federal House of Representatives had been outplayed and defeated, a Tinubu, mad that President Buhari refused to step in whistled and Sam Omatseye went after Buhari.

So severe and pointed was the attack that the Presidency knew for sure that it was a commissioned work by Tinubu.

It got so serious that the then spokesperson for Asiwaju Bola Tinubu, Sunday Dare had to issue a statement on behalf of his principal, denying that they commissioned Omatseye to write the piece.

But Omatseye is not even a stranger to creating narratives and controlling the news, before his romance with Asiwaju Tinubu, he was in the employ of Concord Newspaper owned by the Late MKO Abiola, a man who like Tinubu had an exquisite taste for brilliant journalists, understood what power the media held and the need to have a few close to you.

Mr. Sam Omatseye, like any other citizen, is entitled to support whomever he wants. Where it becomes a problem is when there’s this continued attempt at masquerading as an unbiased umpire with a genuine concern for the country when he is in fact hiding under journalism to launch hit pieces.

For instance, while in “Obi-tuary”, Sam Omatseye attacks Peter Obi and attempts to interrogate corruption, he has not uttered a word about Tinubu’s bullion vans.

He has not said a word about his certificates or the drug dealing charges. He has kept mute about them, choosing only to attack people that were against his principal.

Elders are by nature, models, and in them the young see either who they hope to become when they grow older or how they hope never to turn out.

For Omatseye, a 61-year old attack dog for integrity-deficient politicians, I’ll leave you to decide which it is.

KO is OK with Ambassador Plenipotentiary And Extraordinary

Nigeria: 62 things in 62 years that got us here