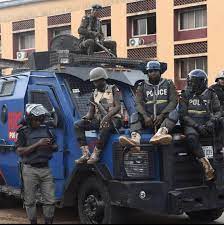 After successfully coordinating the kidnapping of a female legal practitioner in the city, the suspects were apprehended by Crack detectives of the Force Intelligence Bureau Intelligence Response Team (FIB-IRT) on November 10, 2022 at Rumuola junction in the Rivers State.

The two suspects, along with two other criminal gang members who carried out the kidnapping, had previously spent 11 years in the Nigeria Correctional Service, Imo State as awaiting trial inmates for the offense of kidnapping.

The suspects confessed to the Intelligence Response Team (IRT) led by DCP Olatunji Disu that “we left the correctional facility on Monday April 5, 2022 during the attack on the prison by a group of unknown gunmen who threw dynamites at the walls of the prison and commanded inmates to flee.”

“We went into kidnapping, robbery, and car theft after some armed soldiers invaded and destroyed the oil bunkering site we were making a living from after the jailbreak freedom as we lost everything that was sustaining our family,” he continued.

The suspects, along with another gang member who is also an ex-convict from the same prison facility, were later apprehended by police for kidnapping a female lawyer in Port Harcourt.

They were apprehended after IRT agents received information about the kidnapping of a female lawyer who had been held captive for three days. Police authorities directed their operatives to conduct an immediate search and rescue of the lawyer.

The lawyer was released after the suspected criminals were apprehended, and she identified two of the suspects in the Police net as the people who kidnapped her and stole N5 million from her bank account.

In recounting his prison experience, gang leader Okechukwu Edison stated that he was imprisoned because he loaned a car to a roommate named Emmanuel, who was later arrested and charged with kidnapping.

He also stated that he had spent eleven years as an awaiting trial inmate in the Imo State prison prior to the jail break, and that the attackers of the prison invaded the facility and ordered inmates to leave.

On kidnapping, he stated that they spotted the victim along Igwuruta Road coming out of a shop in the city and kidnapped her, then called one Chukwuemeka Onu 25 male from his village to arrange for the safe keeping of their victim in an unfinished building.

According to Onu’s confession, he took Okechukwu, the gang leader, to Eneke, a semi-urban settlement in the city, to make arrangements for where to keep his bunkering equipment, not realizing he was accompanied by a kidnapped woman.

One of the suspects also admitted that he was imprisoned in the Imo State prison prior to the jail break and had spent 14 years there before his case of armed robbery was reassigned to a new judge.

The IRT team is still looking into their involvement in other criminal activities in the state and making efforts to apprehend other gang members.

The Inspector-General of Police, Usman Alkali Baba, through the Force Public Relations Officer, CSP Olumuyiwa Adejobi had previously issued orders that all suspects arrested be prosecuted in the nation’s law courts as soon as possible.