THE Apo Legislators Quarters Central Mosque Committee on Monday officially sacked the suspended Chief Imam of the mosque, Sheikh Muhammad Nuru Khalid, for not showing remorse for his attitude that led to his suspension.

Sheikh Khalid was on Saturday, April 2 suspended by the committee for delivering a sermon last Friday, which it claimed was capable of inciting public outrage. 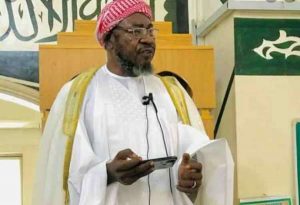 Sheikh Khalid, according to the chairman of the mosque committee, Senator Saidu Muhammed Dansadau, was suspended until further notice due to the ‘inciting’ sermon he (Khalid) delivered, in which he advised people not to vote in 2023 general election unless politicians respond to some critical questions.

Dansadau stated that Sheikh Khalid ought to have advised Nigerians to vote out those that transgress the Almighty and breach people’s social contract as well as the state. But the Imam had said he was unperturbed and that it is only Allah can dethrone him. He vowed to always say the truth to authorities whenever he finds himself.

However, in a letter, dated April 4, 2022, entitled, ‘Letter of disengagement from the services of National Assembly Mosque’, signed by Dansadau and addressed to Sheikh Khalid, the mosque committee stated that the Imam’s reaction to his suspension created the impression that he was not remorseful.

The committee further stated that its decision to disengage Sheikh Khalid was informed by its obsession to promoting peace in the country, adding that it believed no sacrifice was too much to disengage him to ensure peace prevailed in Nigeria.

It noted that members were convinced that the embattled Imam had no intention to change the mode of his Friday sermons.

The letter read: “We regret to inform you that from today, April 4, 2022, you have been disengaged from the services of the above-mentioned mosque. This action is occasioned by the non-remorseful attitude you exhibited following your suspension on April 2, this year.

“Akamakallah, you know better than me by the teaching of Islam, the essence of administering punishment is to correct behaviour.

“Unfortunately, your media reaction to the suspension creates the impression that you are not remorseful, not to talk of humbly reflecting on the consequences of your utterances.

“Leadership demands a great sense of responsibility. If our words do more harm than good to larger interest of the country or the public, we have a responsibility to exhibit maximum restraint for the good of public.

“It is obvious, however, that you don’t seem keen to modify your Friday sermon to be reflective of the volatility of the security situation in the country.

“As leaders of the mosque, we have a sacred responsibility to avoid utterances that are capable of making a bad situation worse. This is our fear and concern.

“Our decision is informed by our obsession to promoting peace in the country. We are not oblivious of the implication of our action in view of the penchant of many Nigerians for critique of government of the day.

“We however believe, no sacrifice is too much for the committee members to disengage you as part of our contribution to ensure peace prevails in our mother land no matter the gravity of the consequences because we are convinced that you have no intention to change the mode of your sermon in the course of Friday prayers.”