ABOUT 1.2 million people are at risk of explosive mines action in Borno, Adamawa and Yobe. This was made known on Monday in Abuja by the United Nations Resident and Humanitarian Coordinator in Nigeria, Mr Matthias Schmale. Speaking at the 2022 International Day for Mine Awareness and Assistance in Mine Action, Schmale of the United Nations Relief and Works Agency, said that 1.2 million people needed life-saving assistance in the three states. 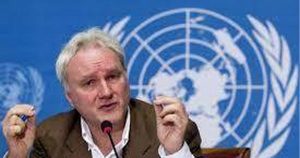 He said those at risk were identified during the 2022 Humanitarian Needs Overview process of the UN agency.

He noted that explosive ordnance in their different forms continued to represent immediate, grave and additional threat to already suffering populations in Northeast Nigeria.

He said the United Nations Mine Action Service (UN- MAS) collated 1,532 incidents in the region involving explosive hazards from January 2016 to January 2022 involving more than 10,000 causalities.

About 1,356 civilians were injured and 789 killed from the number of causalities recorded, he added. According to the News Agency of Nigeria (NAN), Schmale in January 2019 said, mine action organisations provided critical life-saving information to mitigate the risk by explosive ordnance by educating more than 1.2 million Nigerians in conflict-affected communities.

“Mines and other explosives are an everyday threat to civilian populations; we particularly condemn the use of improvised mines which kill without discrimination.

“It is important to remind that such devices go against international humanitarian law,” he said.

Schmale added that the UN was pursuing efforts to deliver life-saving assistance to affected populations and encourage the development of a nationally-owned and coordinated response to reinforce Nigerian capacities.