The Federal Government has applauded the nation’s infrastructure construction leader, Julius Berger Nigeria Plc, for its uncommon and productive commitment to successful project implementation as well as for its engineering excellence which it described as ‘excellent’.

The Minister of Finance, Budget and National Planning, Mrs. Zainab Ahmed, who visited  the Second  Niger Bridge project to see the extent of works progress also witnessed the history-making final concrete casting  that connected the last span of the bridge to technically complete the construction of the bridge by Julius Berger. 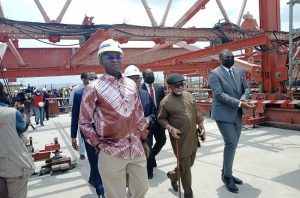 Mrs. Ahmed also hailed the Nigerian Sovereign Investment Authority, (NSIA) over its work on the second Niger Bridge. Other senior government officials on the Minister’s entourage to the project site included the Chairman, Board of Directors of the Nigerian Sovereign Investment Authority, Mr. Farouk Gumel, and the NSIA Managing Director, Uche Orji. The Deputy Governor of Anambra state, Gilbert Onyekachukwu Ibezim, also joined in inspecting the Project.

The Minister’s visit is the second in approximately three weeks, coming after President Muhammadu Buhari, represented by his Chief of Staff, Professor Ibrahim Gambari, had conducted an inspection visit to the project works. The project, which is under construction by Julius Berger Nigeria Plc, is being oversighted by the NSIA with funding from the Presidential Infrastructure Development Fund (PIDF).