The European Union (EU) has urged Nigeria to take advantage of the opportunity offered by the present crisis in Europe to shore up gas supplies to it.

With oil exports from a critical pipeline on Russia’s Black Sea Coast fully halted last Wednesday, the United States and the EU quickly moved in by creating a task force committed to reducing dependence on Russian energy supplies. 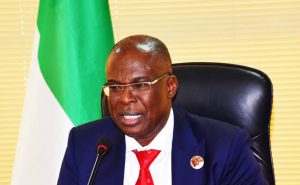 The appeal for Nigeria’s intervention was made by Ambassador Samuela Isopi, during a courtesy call by EU Ambassadors to Minister of State Petroleum Resources, Mr.Timipre Sylva, in Abuja last week

She appealed to Nigeria to step into that gas supply chain as an alternative to Russia. She added that the country must not allow the opportunity to pass it by.

While reflecting on the security situation in the Niger Delta that drastically impacted on gas supply in the last few years, Isopi urged the Nigerian government to step up security in the region to guarantee gas supply to EU member states.

She particularly expressed concern over the spate of attacks on Shell, Eno and Total Energies’s gas infrastructure that led to the declaration of force majure by the companies and noted that the development was of great concern to Europe. “The recent development in the Niger Delta is of great concern to us,” she said.  The envoy added that the EU was however, reassured by the recent visit by Sylva and other top government officials to the site of the vandalised infrastructure in the region.

The French Ambassador to Nigeria, Ambassador Emmaunelle Blatmann, who went back memory lane on the diplomatic relations between Nigeria and France, said in spite of the current challenges in the sector, French companies were ready to commence new investments in Nigeria.

Other ambassadors, who spoke in support of a strengthened economic and diplomatic relations between the EU and Nigeria, were the Spanish Ambassador to Nigeria Juan Sell, Portuguese Ambassador, Luis Barros, and Italian Deputy Head of Mission, Tarek Chazli.

In his response, Sylva urged the EU to step up investments in gas and hydrocarbon in Nigeria to be able to meet the bloc’s energy needs.

The Minister urged EU to encourage its oil and gas companies such as Shell, Eni, and Total Energies to scale up investments in the Nigerian gas sector.

“One of the things we warned against earlier was the speed with which EU was taking away investments in fossil fuels.

We warned that the speed was faster than they were developing renewable energy. You can see now that what we were warning against is what is happening now,” Sylva said.

He told the delegation that what stunted growth in the development of gas in Nigeria was fresh investments, and called for a change of attitude on the part of EU if its requests to increase supplies to Europe would be realised.

According to the minister, one of the biggest challenges the sector has are lack of investments.

Surprisingly, we are the biggest in Africa. If we cannot attract investments to Nigeria, you know where we are heading.

You have been our long time friend. As at today, our gas reserve is one of the biggest in the world. We have a proven gas reserve of 206 tcf and if we really focus on gas exploitation we can get up to 600 tcf.

The minister further said that after the Russia-Ukrainian war, EU must have a buffer or an alternative source of gas, and collaboration with Nigeria in that regard was paramount.

He reiterated Nigeria’s commitment to working with the EU to bridge the gap in terms of gas, adding that from the Russian-Ukranian crisis, it was evident that gas had been weaponised and unless it created an alternative, it would only get worse.

He reassured the EU diplomats of Nigeria’s readiness to be an alternative supplier of gas to the EU, but urged its companies operating in the country to investment more here.

We would like to be reliable partners to solve the energy problem in Europe and we can only achieve this by working together. It is only when investment in these areas is increased that Nigeria can meet that obligation,” Sylva said.

While emphasising the need for transfer of technology in gas and renewable energy, he said Africa must be allowed to continue to exploit its hydrocarbon deposits to develop the continent.