Major oil majors have expressed fears that the Nigerian petroleum sector is facing imminent collapse if the level of theft in the sector continues unabated. This is because the total value of Nigeria’s crude oil stolen between January 2021 and February 2022 is about $3.27bn (representing N1.361tn at the official exchange rate of N416.25 to the dollar), the Federal Government declared on Thursday.

International oil companies and their counterparts in Nigeria said the massive oil theft across the country currently posed a threat to not just their existence, but to the Nigerian economy. 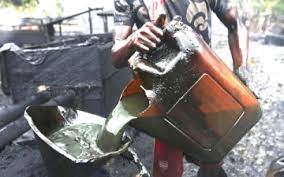 The Federal Government through its Nigerian Upstream Petroleum Regulatory Commission, met with the Oil Producers Trade Section, as well as the Independent Petroleum Producers Group in Abuja at a stakeholders’ engagement on crude oil theft.

OPTS is a body comprising IOCs operating in Nigeria, while IPPG is an association of indigenous exploration and production companies.

A presentation by the NUPRC at the event indicated that oil theft rose sharply between 2021 and 2022, as an official of the IPPG stated that about 91 per cent of total crude produced at the Bonny Terminal was stolen in January 2022.

This came as the OPTS Chairman, Rick Kennedy, who doubles as Managing Director, Chevron Nigeria Limited, and represented IOCs at the meeting, described the massive oil theft across the country as an organised criminal activity.

Kennedy, who was represented by the Managing Director, ExxonMobil Nigeria, Richard Laing, said, “When I say it is an organised criminality, the sophistication of the engineering involved points towards a high degree of sophistication and technology, as well as the distribution.

“I think we’ve just got to be honest and accept that this is not theft but more than that.”

The IOCs called for a quick solution to the menace, stressing that the development posed a serious threat to their existence.

“It is important that the Federal Government, industry, and a whole bunch of other stakeholders find a solution and find it quickly. That will be my strong advice,” Laing stated.

On its part, the IPPG through its Chairman, Abdulrazaq Isa, said the criminal operations were being extended to host communities, adding that it must be stopped now before its too late.

“This is a massive criminal operation and is now being extended into the communities as they’ve been dragged into it,” Isa, who was represented by the Managing Director, Waltersmith Petroman Oil Limited, Chikezie Nwosu, stated.

Explaining the jump in oil theft between last year and now, Nwosu said, “In December 2021, the overall theft or what was stolen from the line was 91 per cent of the crude.

“That means for every 100 barrels, all that got to the Bonny Terminal was nine barrels. In January this year it improved to 75 per cent but in February it went back to 82 per cent.”

The IPPG representative stated that independent producers could no longer survive, “and that is why I’m talking about the urgency.”

He added, “The critical part of this problem started in 2021. Prior to that, you could still survive with crude oil theft when it was still single digit in terms of percentages.

On the impact of this menace, the NUPRC in its report stated that government revenue was adversely affected, as revenue accruing to the operators had been impacted negatively.

The NUPRC said there had been a loss of value arising from surging costs due to frequent repairs of damaged facilities.

It stated that spillages and leakages were mostly caused by activities of saboteurs leading to environmental degradation and deprivation of source of livelihood to indigent people.

It, however, stated that actions were being taken to mitigate crude oil theft and pipeline vandalism, as a work team comprising the regulator and operators was set up in August 2021.

On the implementation of the host communities provision in the PIA 2021, it stated that the draft regulations were already in place, as further engagement with stakeholders was underway.

The Chief Executive, NUPRC, Gbenga Komolafe, said the meeting was organised by the commission to hear what the IOCs and their counterparts in Nigeria had to say about the recent menace of oil theft.

He said, “The meeting was convened to get the opinion of stakeholders, especially the investors, which include the OPTS and IPPG. It is the concern of the government that we increase our oil production.

“Because when the upstream is sick, it affects the well-being and health of the country. The situation is happening upstream and is a threat to the existence and wellbeing of the economy.

“So we are very concerned about this and we’ve been doing a lot and will ensure that we do everything possible to increase oil production in a manner that will make the nation benefit from the upward movement in the international prices of crude.”