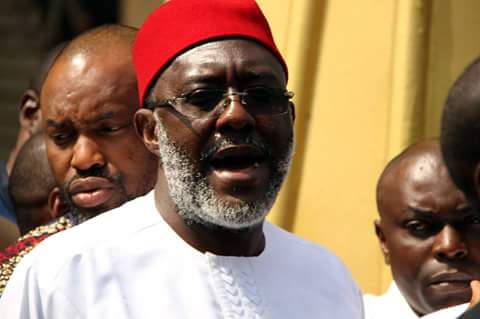 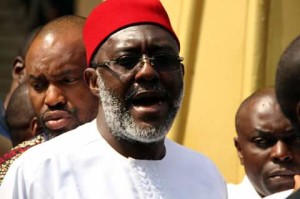 While Secondus is facing court actions over his current running of the party as acting President, Mohammed and Metuh are undergoing trial for their allegedly benefiting in the $2.1 billion arms fund contract sharing scandal.

The angry PDP deputy national officers argued that it became necessary for the embattled duo of Mohammed and Metuh to vacate their offices on the ground that the charges against them were in their individual capacities and not on behalf of the party.

According to the PDP chieftains, their demand for Mohammed and Metuh to quit was not a pronouncement of guilt but a passionate appeal to halt what they termed erroneous concept that the party tolerates corruption.

They called on the National Executive Committee (NEC) to convene a meeting immediately in order to formalise the appointment of a new spokesperson, in line with the party’s constitution “that is not weighed down by integrity issues.”

‎They also called on party members to disregard the scheduled national convention, which is supposed to be held in March, this year, according to the time table released by the party, saying there was  no approval from NEC.

The officers also stressed the need to properly audit the finances of the party by certified external auditors as enshrined in the party’s constitution, adding that‎ the audit period should be from March 24, 2012 to date.

The four deputy officers, who said they were speaking on behalf of other deputy national officers, also called for the dissolution of all committees set up by the present NWC, led by Prince Uche Secondus as acting national chairman‎, saying “Secondus must also go back to his former position as national vice chairman.” They based their position on the judgment of an Abuja High Court that ordered Secondus to vacate the office of National Chairman.

However, in his response, Secondus accused the officers of playing to the gallery, claiming that “they are being used by the other party to destabilise us, but we are not going to be distracted, we are strong.

“I haven’t assumed the office of chairman; I am still the deputy chairman. I am only administering in acting capacity. They are not the authorised organ of the party. There is nothing like association of deputies. They took us to court and we have appealed. They are ignorant of the law. The constitution is clear that in the absence of chairman, the deputy assumes position. They are doing it out of malice and ignorance,” Secondus said.

Similarly, a counter statement issued by the party’s National Secretary Prof. Wale Oladipo warned against “fifth columnists” within the party.

Although he did not directly refer to the statement credited to the national officers, Oladipo said the party is united and warming up for its national convention in March when national officers will be elected.

The statement read in parts: “The attention of the national leadership of the PDP has been drawn to reports in the media credited to some members of the party regarding the on-going ordeal of some of our leaders with the EFCC as well as issues relating to the position of the National Chairman of our great party.

“Indeed, we understand the concerns of our members especially since the unfortunate electoral setback, its attendant trauma and disagreements within the party as well as the recent development leading to the probing of some of our leaders and of course our campaign funding by the APC-led government.

“In the same vein, we have noted the desperation of some opportunistic and selfish individuals, including those being used by the APC, to draw political capital from the present challenges facing our party.

“While we await the judicial determination of the cases involving some of our leaders at the EFCC, it is important that all party members show commitment to our rebuilding effort by ensuring utterances that encourage and unite rather than further discourage and divide our members. Anything contrary to this would be playing into the very hands of those who want to decimate our party, destroy our common destiny as a people and install a one-party state in our country.

“Our earnest attention for now is our on-going rebuilding efforts, the amendment of our party’s constitution and our scheduled National Convention in March this year to produce new leaders in line with the statutory requirements of our great party. All the statutory organs are aware of the laid out plans by the NWC, which would soon be presented to them appropriately and accordingly.

“The public and the media are by this made aware of the fact that the PDP remains a big family despite our temporary electoral setback. Also, our leadership and statutory organs, the NEC, NWC, Caucus, Board of Trustee, forum of Governors and caucuses of various legislative houses, are all united in the common effort to rebuild and reposition the party, especially with preparations for our National Convention in March.”