Chairman of the Independent National Electoral Commission (INEC), Professor Mahmood Yakubu on Wednesday gave an update on the Continuous Voters Registration of eligible voters by the Commission, ahead of the next general elections. Addressing the gathering of journalists and his National Commissioners, Professor Yakubu gave a figure of 1,854,859 as new Permanent Voters Cards ready for collection. Out of the estimate, 1,390,519 were newly printed. 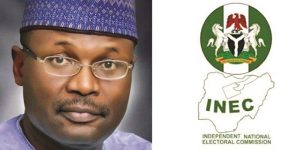 PVCs for genuine new registrants while 464,340 PVCs were for applicants who made requests for transfer or replacement of cards. The INEC Chairman however painted a worrisome picture of incidents of multiple registrations leading to the discovery of 1,126,359 invalid registrants by the Commission.

The chart given by the Commission revealed that Bayelsa State contributed the highest figure of invalid registrants with 88,950, about 67.1% of the estimate trailed by Ebonyi and Rivers State with 69.1% and 53.2%, respectively.

In the two Southwest states of Ekiti and Osun State, a total of 106,280 fresh applications for Permanent Voters Cards were rejected as invalid. Ekiti had 17,650 invalid registrants while Osun had 88,630.

Professor Yakubu attributed the unfavourable development to deliberate multiple registrations by applicants in connivance with a staff of his Commission.

He also identified ignorance on the part of prospective voters who did not know that they “do not need to re-register if they had done so before,” and “registrants whose data were incomplete and did not meet our Business Rules for inclusion in the register.”

The INEC Chairman said his Commission was able to detect the criminal indulgence in multiple registrations as a result of its initiative to clean up the Voters Registration through the adoption of technology.

Professor Yakubu who noted that no state was immune from the unwholesome double registration said the unsavoury incidences of invalid registration were up to 60% or more in some states.

The INEC Chairman assured Nigerians that the electoral body remained committed to cleaning up the data to inspire confidence in the electoral body. He further dropped the hint that staff of the Commission found culpable to have connived with erring registrants would be prosecuted.

“Sadly, it seems that many registrants, either out of ignorance that they do not need to re-register if they had done so before, or a belief that our systems will not detect this infraction, have gone out to register again. This is despite repeated warnings by the Commission against this illegal action.

“In addition, there are also registrants whose data were incomplete and did not meet our Business Rules for inclusion in the register. Both categories i.e. the failure of ABIS and incomplete data constitute invalid registrations. Presently, nearly 45% of completed registrations nationwide are invalid, rising to as high as 60% or more in some States. This infraction happened in all states of the Federation. No State is immune from it.

“These invalid registrations will not be included in the Register of Voters.

“This development is worrisome because of the time and resources expended in handling these cases. Even more disturbing are the strong indications that some of our staff may be complicit in facilitating these infractions, notwithstanding stern warnings.

“Consequently, the Commission is reviewing reports on such staff and has commenced a detailed investigation which may include the prosecution of those found culpable. Specific registrants associated with these infractions by our staff may also face prosecution in line with Sections 22 and 23 of the Electoral Act 2022.”

“I wish to seize this opportunity to request political parties, the media, civil society organisations and the general public to assist the Commission in educating Nigerians about the problem of invalid registration.