The Joint Action Committee (JAC) of the Non-Academic Staff Union of Educational and Associated Institutions (NASU) and the Senior Staff Association of Nigerian Universities (SSANU), have expressed their readiness to commence indefinite shutdown of academic activities across universities and inter-university centres in Nigeria. 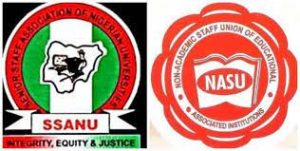 JAC also described as aloof and contemptuous the attitude of the President Muhammadu Buhari-led Federal government towards many agreements reached with unions in the country’s education sector.

“The aloof and contemptuous attitude of Government further incensed our members who resolved that following the failure of Government to even invite the leaderships for a meeting, the strike should be extended by another two weeks before an indefinite and total strike is declared.

“As of today, the two weeks extension is getting to the middle and with no response in sight from the Government, we may be left with no resort but to embark on an indefinite and total strike. This is gradually becoming unavoidable and inevitable.” Said JAC spokesperson, Comrade Peters Adeyemi, when he addressed journalists in Abuja.

Mr Adeyemi further said; “Recall that the Joint Action Committee of NASU and SSANU had embarked on an industrial action which started on Friday, February 5th, 2021 and culminated in a Memorandum of Action (MoA) signed on Thursday, February 20th, 2021. Prior to this, we had embarked on a fourteen-day warning strike which culminated in a Memorandum of Understanding (MoU) signed on Tuesday, 20th October, 2020.

“It is pertinent to note that the issues that led to the Memorandum of Understanding (MoU) of October 2020 and the Memorandum of Action (MoA) of February, 2021 are the same issues that have led to this strike action of March, 2022. It needs to be said that these same issues had led to previous Collective Bargaining Agreements with the Government in 2017, and 2018 before the agreements reached in 2020 and 2021.

“Going by this therefore, it is easy to conclude that the recurring cause of industrial unrests in our Universities and Inter-University Centres, especially between the JAC of NASU and SSANU and the Federal Government, has been the total disrespect and contemptuous disregard for Collective Bargaining Agreements by the Government.”

He also stated; “The above issue, among others, represents the core of our disagreement with the Government. Arising from the last memorandum and following up on the issues, we had written no less than ten letters or reminders to the Government to no avail, not even an acknowledgement. The letters of reminder included those dated 26th July 2021; 18th August 2021; 25th October 2021; 22nd November 2021; 24th February 2022; 1st March 2022 and 16th March 2022.

“It was at the end of all these reminders with no acknowledgement by the Government that we were left with no other resort but to embark on a two weeks warning strike. Prior to the strike, due process was duly followed and the notice was issued in line with the extant laws. Shamefully and painfully, there was no attempt by the Government to intercept or even invite the Unions to a meeting.”

On the question of the core issues that led to the strike, Comrade Adeyemi listed the following as the subject matters that government had refuse to resolve: “The problem of inconsistencies in Payment with IPPIS; Non-Payment of Earned Allowances;

“Non-Payment of Arrears of National Minimum Wage and its Consequential Adjustment; Poor Funding of State Universities;

Delay in Renegotiation of the 2009 Agreements; Non Release of White Papers of Visitation Panels; Usurpation of Headship of Non-Teaching Units in clear violation of Conditions of Service and Establishment Procedures; and Non-Payment of Retirement Benefits to Outgone Members.”