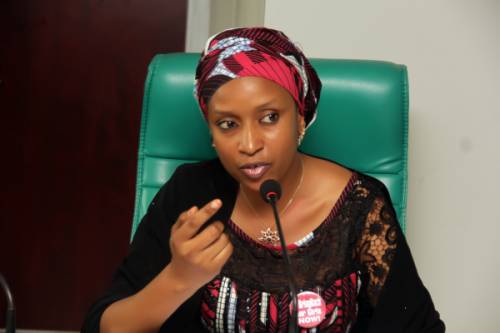 President Muhammadu Buhari on Thursday removed Hadiza Bala Usman as the Managing Director of the Nigerian Ports Authority for no stated reason. However, at the heart of Usman’s suspension is a Cargo Tracking Note (CTN) contract given out to a Lebanese syndicate by top government officials.
It was gathered that the controversial CTN contract was prepared for the Lebanese proxies by Senate President, Ahmad Lawan, the Minister of Transportation, Rotimi Amaechi and the Minister of Justice and Attorney-General of the Federation, Abubakar Malami, to rake in money into their coffers. 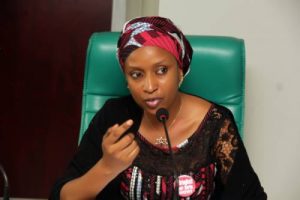 The top government officials had also got President Muhammadu Buhari to buy into their deal, which is under the NPA jurisdiction, to swindle the country and its ailing economy.
On March 21, the President announced that he had directed Amaechi to reintroduce the CTN, citing the “increase in banditry across the nation and ideas to beef up security in the country.”
Buhari had been cajoled that the CTN contract would play a crucial role in enabling the nation address the growing spate of insecurity around cargo handling, according to top sources.
A competent source said, “Malami and the Senate President are behind the deal. Finally, they awarded it to a Lebanese. It is 100% confirmed because they even wanted us to do the contract. But when we realised they were interested in looting, we backed out.
“The Lebanese man will be giving them $300,000 monthly. That was one of the reasons behind Usman’s removal. It was a contract on container tracking. But there is still rivalry in the whole contract; there is the Amaechi camp on one side as well as Malami and Senate President on the other side.”
“I told you they gave that Lebanese guy. So the last I heard was that he was flying to Germany to look for a company to do it,” another source stated.
On Thursday, no reason was given for the suspension of Usman who was reappointed for another five-year tenure recently. But its not yet clear what Hadiza’s unforgivable sin was or why she was sacrificed for the other top government officers to stay.
According to a release by President’s spokesman, Garba Shehu, President Buhari approved the recommendation of the Ministry of Transportation for the setting up of an Administrative Panel of Inquiry to investigate the Management of NPA.
“The President has also approved that the Managing Director, Hadiza Bala Usman, to step aside while the investigation is carried out. Mr Mohammed Koko will act in that position. The panel is to be headed by the Director, Maritime Services of the Ministry while the Deputy Director, Legal of the same ministry will serve as Secretary. Other members of the panel will be appointed by the Minister,” Shehu had said in the release.