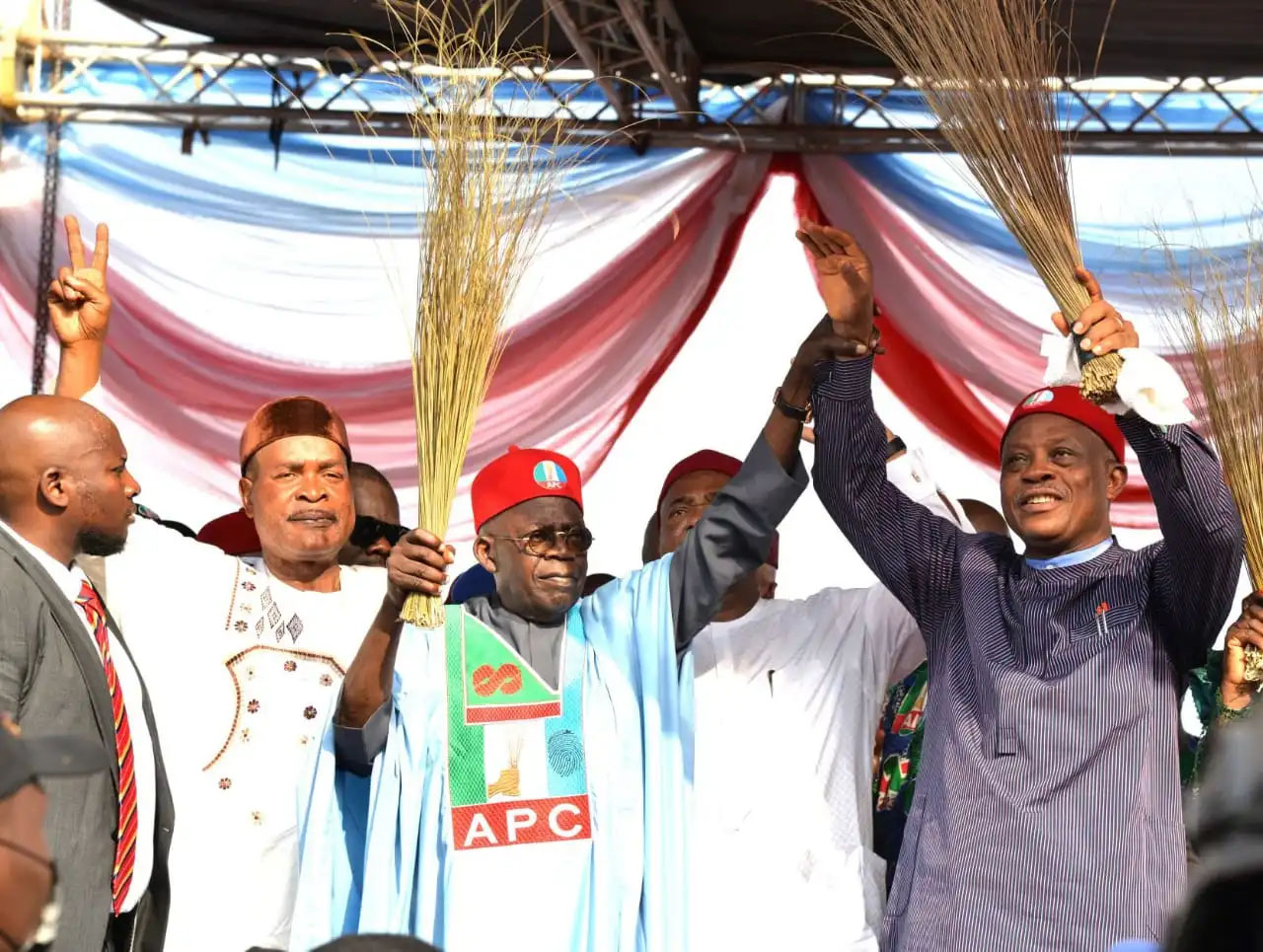 The presidential candidate of the All Progressives Congress (APC) Senator Bola Ahmed Tinubu has promised to end every form of frustration that Nigerian youths have been going through.

He made the promise in Umuahia Thursday at the flag off of his presidential campaign in Abia and the flagoff of the governorship campaign of High Chief Ikechi Emenike, the APC flag bearer in Abia.

In his speech, Emenike promised the youth in Abia that if elected, his government will declare emergency in youth unemployment as his job creation strategy will tackle unemployment head-on.

Tinubu, who directed his message to the youths of Nigeria, alluded to the long closure of Universities due to incessant strike by the Academic staff Union of Universities (ASUU)

“I promise you today, your frustrations will be over . None of you you will spend eight years for a four-year course,” he assured youths.

The Jagaban further promised to give priority attention to education, adding that he would restore confidence in the education system.

Tinubu had arrived at the Sam Mbakwe Airport Owerri at exactly 1.55 pm was received by the governor of Imo State, Chief Hope Uzodinma, and the APC governorship candidate for Abia, High Chief Ikechi Emenike and other party chieftains.

On arrival at the Umuahia Township Stadium he was welcomed by a huge crowd of party supporters, chanting his name and waving party flags and banners.

The former Lagos State said that he was “greatly inspired and encouraged by this largest number” of people that thronged the venue of the presieential flagoff since morning.

He therefore urged the party faithful to translate their support and commitment to real votes for him and all APC candidates in Abia in the 2023 polls.

“I know the value of victory. I know that power is not served a la carte. (So) go to the poll with your PVCs and vote for me for President on the February 25th and on 11th of March, don’t change the symbol, vote for APC candidates,” he said.

“You owe me, you owe Nigeria to put your finger print on the broom for President, Senate, House of Representatives, governorship and House of Assembly elections”.

While urging Abians to vote for APC, he also emphasised the need for them to defend their votes, saying, “don’t let them steal your votes”.

Governor Uzodinma said he was pleased that party leaders and chieftains in Abia were working hard to unite the party and forge a common front to achieve victory in the forthcoming polls.

The APC presidential flag bearer used the occasion to wade into the legal tussle over the governorship ticket of the party being or hesitated by the former minister of state for mines and steel development.

“Our position here is clear: Ikechi Emenike is holding the flag of our party, APC,” he declared, adding that Ogah should stop all litigations.

He said: Uche Ogah please, stop all court actions and come and see me. Come home, let us resolve our matter in our living room,” Tinubu said.

“My, message is for all Abians. We should come home and win this election. There will be a new Abia and development would be everywhere,” he said.

However, he regretted that there were still some people who believe in holding Abia down and in maintaining the present state of stagnation in the state.

But he vowed that Abia APC would overcome all forces of detractors to in its mission to rescue Abia for the greater benefit of the people.

The highlight of the event was the presentation of the party’s flag to the governorship candidate, High Chief Emenike. It was performed by the APC Deputy National Chairman, South, Chief Emma Eneukwu, who represented the National chairman, Senator Abdullahi Adamu.

He urged Abia people “to avoid making the mistake of the past” by voting for the ruling party instead of going the opposition way.

Earlier the Deputy Chief Whip of the House of Representatives, Hon Nkeiruka Onyejeocha in her address complained about the antiparty activities of some High ranking APC members from Abia.

Specifically mentioning the Senate Chief Whip, Senator Orji Uzor Kalu, Onyejeocha said that the Abia North Senator and others in his mould would stay in Abuja and claim to belong to APC while working hard yo undermine the party in Abia.

But, the are not bothered,” the federal lawmaker assured the people, adding that the party was determined to win the 2023 election in Abia State.