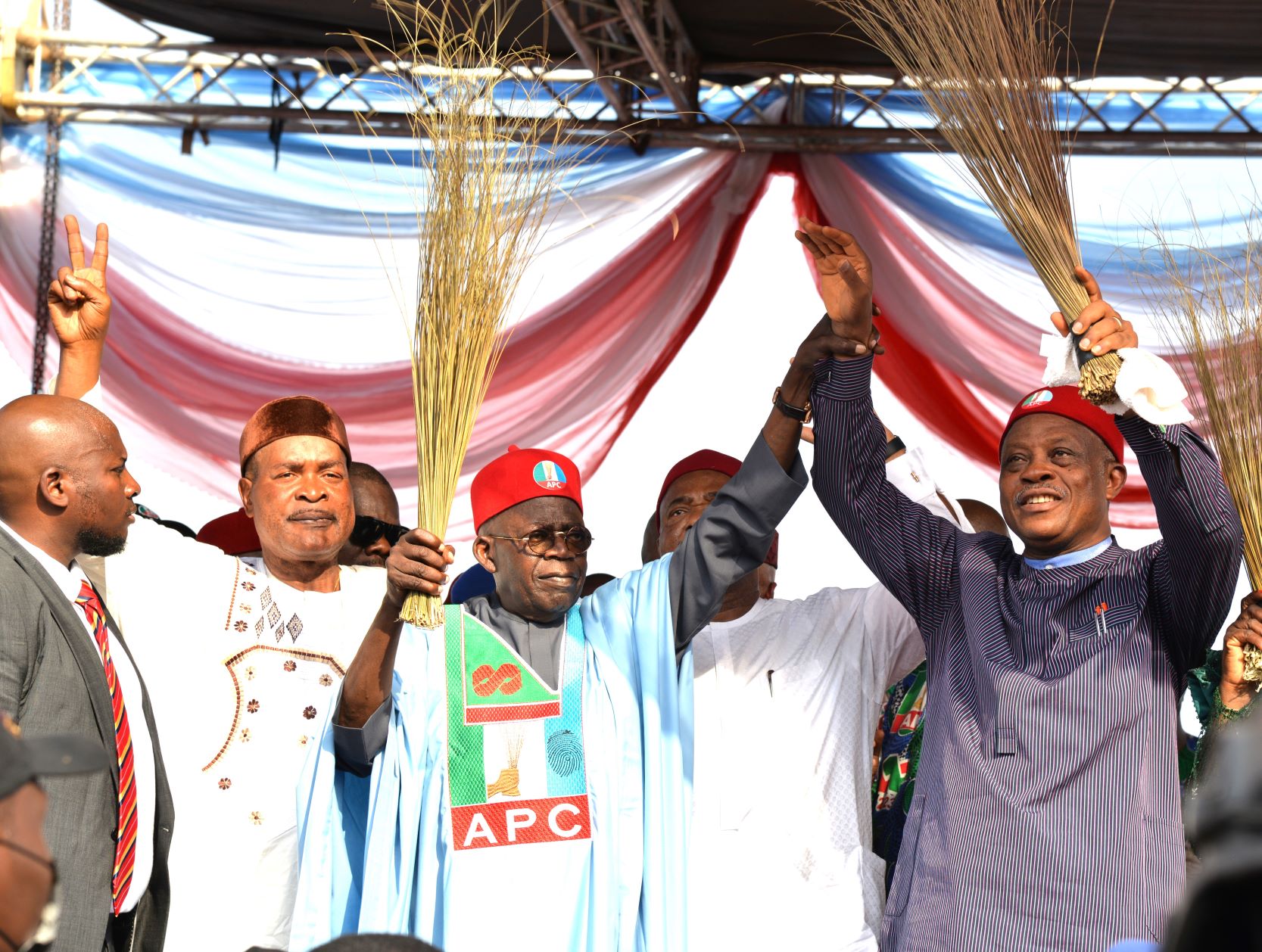 The All Progressives Congress presidential candidate, Asiwaju Bola Tinubu and the Governor of Imo State, Sen. Hope Uzodimma have urged the leadership of the APC in Abia State to close ranks, come together so as to win all the elections in the State next month and in March.

Both spoke in their different remarks during the presidential and governorship campaign flag-off rally that held Tuesday in Umuahia Township Stadium, the Abia State capital.

Amid large turn out of Party faithful, Tinubu and Uzodimma reasoned that the only thing that could hinder the APC from winning all the elections next month and in March is if the leaders work at cross purposes.

The Abia APC governorship candidate in his speech at the occasion said that the party is for all and is willing to embrace everybody calling on those who are engaging in activities that may truncate the Party’s efforts at winning the state in the elections to desist from such, accept the status quo and embrace peace.

While Tinubu specifically invited former minister of Mines, Dr. Uche Ogah, who is in court challenging the governorship candidacy of Chief Ikechi Emenike to a meeting with him, Governor Uzodimma thanked the leadership of the APC in Abia in advance for their willingness to work as a team in the interest of the Party and the State.

Tinubu  told the the youths, ‘’your  frustrations are over, and there will be no more strikes in the universities,” even as assured that his administration will “give priority to Education.”

“The confidence and hope for tomorrow is here with me becoming the President of Nigeria come February 25, 2023.”

To all the aggrieved members of the Party, especially those that contested different positions and lost, he told them to come back for them to talk it over.

While expressing his gratitude to the people for their patience and perseverance in waiting for a long time to be part of the rally, Tinubu advised them to go to the polls with their PVCs, vote for him and other APC candidates all the way.

He also appealed to the people of Abia State to vote for the APC governorship candidate, Chief Emenike, noting that “Emenike being your Governor will link your State to the National Political Grid, in addition to ensuring that Abia State becomes a tourism haven by collaborating with the Federal Government.”

Tinubu, again, thanked the South East Presidential Campaign Coordinator, Governor Uzodimma for “his doggedness and support in ensuring that the party moves forward in the South East.”

To the women supporters who came out in their numbers to stand by him, he assured them that their labours shall never be in vain if he emerges the President of Federal Republic of Nigeria next month.

Earlier, Governor Uzodimma had used the occasion to thank Abia people and their leaders for “their unity of purpose and for working towards reconciliation of aggrieved members of the Party in the State.”

The Governor urged the people to ensure they vote APC in all the positions, assuring them that their labours will not be in vain.

In his welcome remarks,  the APC governorship candidate for Abia State, Chief  Emenike, thanked all who attended the rally and assured them that APC is one family in  the State.

He said: “Abia must be rescued first before it will be developed. There will be new Abia where the youths will get employment and empowerment.”

To the Abia pensioners believed to be owed many years of unpaid pensions, and civil servants who are not being paid their wages regularly, he promised that their sufferings will be over if he becomes governor.

The National Chairman represented by the  Deputy National Chairman, South, Chief Emma Enukwu urged the people of Abia not to make the mistakes of the past, but should ensure they vote APC in all the positions.

Other speakers – the Abia APC Chairman, the APC National Woman leader, Dr. Beta Edu, House Representatives member, Hon Nkiruka Onyejiocha – all promised Tinubu that the votes of the Abia people  will be for the APC.