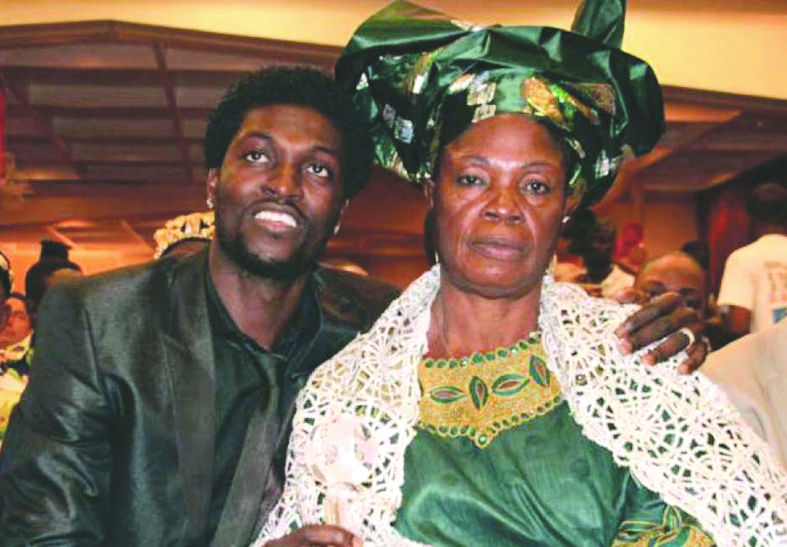 The Emmanuel Adebayor family imbroglio has taken a mercy twist as the Togolese and Tottenham Hotspur striker engages family members in a social media brawl. The lingering feud that pitched the embattled footballer against his family members, including mother and siblings reached a terrible anti-climax recently when the former Arsenal and Manchester City striker posted an 877-word statement stating his own side of the saga, promising to deliver Part 2 of the story soon.

And barely 48 hours, had the post gone viral on Facebook as Lucia Adebayor, his sister delivered her own version, claiming the footballer is a liar and that the family is done with him. Below are excerpts of the #FamilyWarOfWords:

‘SEA, I have kept these stories for a long time but I think today it is worth sharing some of them with you. It’s true that family matters should be solved internally and not in public but I am doing this so that hopefully all families can learn from what happened in mine. Also keep in mind that none of this is about money.

‘At the age of 17, with my first wages as a footballer, I built a house for my family and made sure they are safe. As you all know, I have received the trophy of African Player of the Year in 2008. I also brought my mother on stage with me to thank her for everything. In that same year, I brought her to London for various medical check-ups.

‘When my daughter was born, we contacted my mum to inform her but she immediately hung up the phone and didn’t wanna know hear about it. Reading your recent comments, some people said my family and I should consult T.B Joshua. In 2013, I gave my mother money so she could consult him in Nigeria. She was supposed to stay for 1 week; but 2 days into her stay, I received a call saying she left.

‘Apart from all that l also gave my mother a great amount of money to start a business of cookies and different items. Naturally, I allowed them to put my name and picture on them so they can sell more. What else can a son do in his power to support his family?

‘A couple years ago, I bought a house in East Lagon (Ghana) for $1.2 million. I found it normal to let my older sister, Yabo Adebayor stay in that house. I also allowed my half brother (Daniel) to stay in the same house. A few months later, I was on vacation and decided to go to that house. At my surprise, I saw many cars in the driveway. In fact, my sister decided to rent out the house without me knowing. She also kicked Daniel out of that house.

‘Note that the house had about 15 rooms. When I called her and asked for explanation, she took about 30 minutes to abuse and insult me over the phone. I called my mother to explain the situation and she did the same as my sister. This same sister says I am ungrateful. Ask her about the car she is driving or anything she is selling today?

‘My brother Kola Adebayor, has now been in Germany for 25 years. He travelled back home about 4 times, at my expense. I fully cover the cost of his children’s education. When I was in Monaco, he came to me and asked for money to start a business. Only God knows how much I gave him. Where is that business today?

‘When our brother Peter passed away, I sent Kola a great amount of money so he could fly back home. He never showed up at the burial. And today that same brother (Kola) is telling people that I am involved in Peter’s death. How? He is the same brother who went and told inaccurate stories about our family to The Sun in other to take some money. They also sent a letter to my Club when I was in Madrid so I could get fired.

‘When I was in Monaco I thought it would be good to have a family of footballers. So I made sure my brother Rotimi gets into a football academy in France. Within a few months; out of 27 players, he stole 21 phones.

‘I would not say any anything about my brother Peter Adebayor because he is not here today. May his soul rest in peace.

‘I was in Ghana when I received the news about my brother Peter being seriously ill. I drove the fastest I could to Togo in order to meet him and help. When I arrived, my mother said I could not see him and I should just give the money and she would solve everything. Only God knows how much I gave her that day. People are saying I didn’t do anything to save my brother, Peter. Am I a fool to drive 2 hours to Togo for nothing?

‘I organised a meeting in 2005 to solve our family issues. When I asked them about their opinion, they said I should build each family member a house and give each of them a monthly wage.

‘Today I am still alive and they have already shared all my goods, just in case I die.

‘For all these reasons, it took very long for me to set up my foundation in Africa. Every time I try to help the people in need, they had to question me and all of them thought it was a bad idea.

‘If I am writing this, the main purpose is not to expose my family members. I just want other African families to learn from this. Thank you.’

“Keep on lying to the whole world brother. Where is the car you got for mum? You took it back. The house you claim you bought for sister are all lies. The phones Rotimi stole are all lies. Money is not everything oooo. We the family don’t even need you again just be on your own so we do the same. The fact you have it today doesn’t guarantee your tomorrow. May God Allah forgive you. The Alphas and Mallams have done great harm to your life. You need God. Only God can save your soul.”