Eagles will be under pressure in Abuja- Addo

Ghana coach Otto Addo says Nigeria’s inability to score in Kumasi in the first-leg of their 2022 World Cup playoff could be the decisive factor in the return leg tomorrow.

The former Black Stars winger said the Super Eagles will be forced to come out in search of goals in Abuja which could help the Ghanaians to also attack. 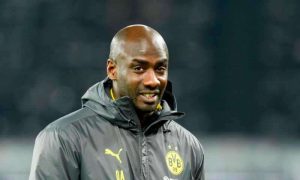 This comes after they played out to a goalless draw in Kumasi on Friday night as the two sides missed some good scoring opportunities thanks to the agility of Nigerian goalkeeper Francis Uzoho and Ghanaian shot-stopper Jojo Wollacott.

Ghana coach Addo was delighted with his players’ display in the match even though they could not score in the home game.

“I think the guys did well but under these circumstances, I can say they followed the plan and even though we made some mistakes, they stuck to the plan. We had good positions and good runs,” Addo said in the post-match press conference.

“We had good positions, good runs. We created some chances and controlled the game in the first 30 minutes and there were some breaks and some fatigue.

“We couldn’t press like we would have wanted to, but in all, it was a deserved draw.”

He further said the performance of his team during Friday night’s game showed that they have talented players who can cause problems for the Super Eagles in Abuja tomorrow in the return leg.

“The Nigerians saw that we can play as well. Even though the AFCON wasn’t good I think we matched them up,” the Ghana coach said.They have high-quality players but in all it was equal. The pressure will be on them at home andaway goals can hurt a lot.”

The second-leg match will be played in Abuja at the Moshood Abiola Stadium.