Mali‘s top players are certain they will defeat Tunisia tomorrow to qualify for the 2022 World Cup despite their first-leg defeat in Bamako.

The Eagles suffered a 1-0 defeat in the first leg which was played on Friday after an own goal by Mali defender Moussa Sissako, who was the unfortunate villain for the home side. 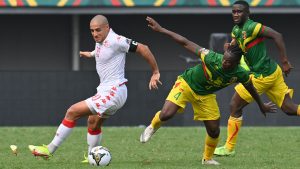 Sissako, who plays for Belgian top-flight side Standard Liege, inadvertently put the ball into his own net in the 36th minute before he was sent off moments later.

The Carthage Eagles have the home advantage going into the return encounter tomorrow as they host the second-leg in Rades but Mali top players are confident they can turn things in their favour.

“We are disappointed with the result but it’s only the first leg,” said Captain Hamari Traoré, who was suspended in the first leg of the two-legged affair.”The players got their jerseys wet, we weren’t able to take advantage of our opportunities”, admitted the Malian defender who firmly believes in his team’s chances of reversing the result.

“I’m going to take this opportunity to congratulate the public who came out en masse, it’s just a false start and I hope the public will continue to support us,” added the Eagles’ right-back.

“We have the means and the will to do it, to succeed in this historic qualification”, insisted Traoré.