Super Eagles winger Moses Simon says he will not be caged when Nigeria face Ghana in the second leg of their Qatar 2022 World Cup play-off match at the Moshood Abiola National Stadium, Abuja on Tuesday (today). 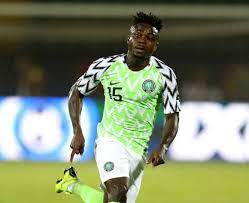 Simon didn’t have the best of performance in the first leg at the filled Baba Yara Stadium in Kumasi last Friday, as Black Stars midfielders and defenders swarmed him anytime he had the ball.

Fans have called on coach Austin Eguavoen to use other players in Simon’s place after his below par performance  in Kumasi, but the winger pledged that if given the opportunity, he would play to the best of his ability.

Simon, Nigeria’s best player at the 2021 Africa Cup of Nations in Cameroon, promised that fans would see the best of not just himself but the entire team today.

“My form is intact and you will see it in the game against Ghana, but truthfully, it’s not all about me but the entire team. We know the magnitude of this game and we will give our all,” Simon said at the pre-match press conference.

“The game against Tunisia at the AFCON, I wasn’t caged. The game against Ghana, it was all tactics because we all know that it could be difficult because they know how we play, so we decided to bring in three players because we know that when they come here (to Nigeria), they will take it.”