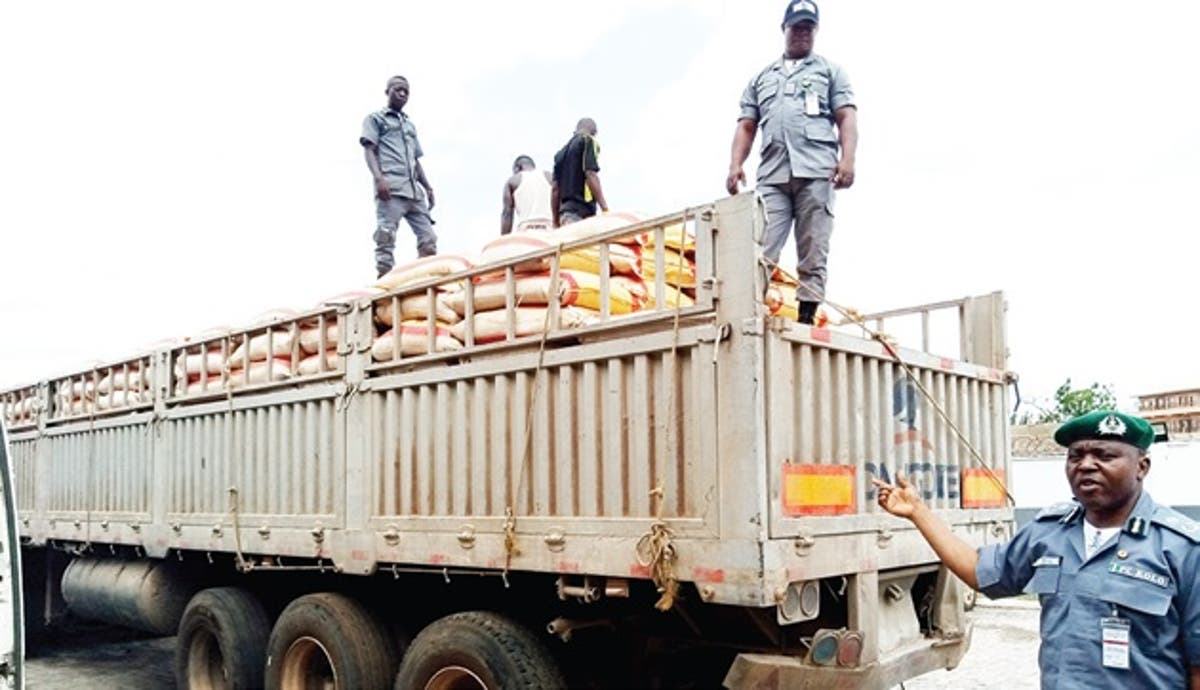 Customs officers attached to the Ogun 1 Command of the Nigeria Customs Service (NCS) have revealed that 600 bags of 50kg foreign parboiled rice heading to the eastern flanks of the country was intercepted at Ijoun. The service said the contraband was neatly loaded on a Dangote Cement truck.

In a statement issued late on Wednesday by its Spokesman, Hammed Busoye Oloyede, the command also revealed that other vehicles belonging to multinationals like Coca-cola and others are being used by smugglers to convey contraband. 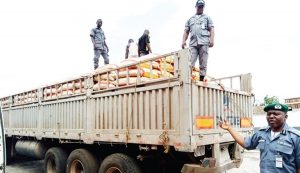 The statement quoted the Customs Area Controller (CAC) of the command, Peter Kolo, saying: “As part of our achievements in our operations in the state during the month of April 2021, I am glad to inform you that during the period under review (April 2021), the command has been able to sustain its achievements in the area of anti-smuggling activities by recording another seizure of over 7,000 bags of 50kg each of foreign parboiled rice (the equivalent of 12 trailer loads). It is important to note the catastrophic damage this quantity of rice will cause to the Federal Government Rice Agricultural Policy if allowed to get into the Nigerian markets.

“The Federal Government of Nigeria’s directive on border closure is still subsisting as such there is no revenue generated from imports and exports activities. However, a total sum of two hundred and twenty-five thousand naira zero kobo only (N225,000.00) was generated from the auction sales of seized petroleum products and scrap metals in the command.

“I wish to reiterate here that our intelligence network in the command is still very strong as we deployed intelligence in virtually all our operations in the area and greater successes are continuously being recorded on daily basis. Let me warn the criminal elements in the state that in whichever way and methods you plan your smuggling activities; we shall definitely uncover it, make an arrest and inflict gross financial injury on such perpetrators.

“Recall during the March 2021 press briefing, we revealed that some facilities of multi-national companies operating in Ogun State like Coca–Cola Company are being used to smuggle contraband goods into the country. Just a few days ago, another articulated truck bearing the inscription and logo of DANGOTE CEMENT CO LTD was intercepted along the Ijoun border axis loaded with over six hundred (600) bags of 50kg foreign parboiled rice heading to the eastern part of the country. Three (3) people were arrested including the driver of the vehicle and an investigation is going to unravel those behind this act of massive smuggling activity.

“Recently, the command’s patrol officers came under severe attack from the daredevil smugglers, hoodlums and their sympathizers using pump action riffles, AK-47 riffles, dane-guns, cutlasses and other dangerous weapons at Oja–Odan in Yewa Southern part of Ogun State in which some command officers sustained gunshot injuries. The attack was successfully repelled and over three hundred bags of foreign parboiled rice was seized in that operation. Let it be known that these pockets of attacks on security operatives will not deter or discourage us from the continuous onslaught on smugglers, their sympathizers and other economic saboteurs in Ogun State.

“Let me at this point once again thank our critical stakeholders, members of the media, other security agencies and traditional rulers for their collaborative efforts and synergy with the service while carrying out our statutory mandate in the state.”