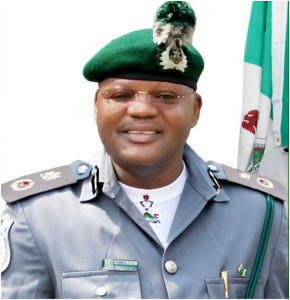 The Federal Operations Unit (FOU) Zone C, Owerri of the Nigeria Customs Service recorded a total of 467 seizures of illegally imported items with a Duty Paid Value (DPV) of N2.7billion in 2015.

Area Controller of the unit, Comptroller Victor David Dimka who disclosed this while briefing  newsmen in Owerri said that the underpayment recovered for some of the seized items stood at N130 million.

He added that 316 suspects were arrested in connection with the seizures with one convicted and 23 cases pending in court of which the unit won seven cases within the reviewed period.

Giving a breakdown of the seizures, Dimka said they include 343 vehicles; 378 bales of bags/suitcases with 466 pieces; 6,472 pieces of imported used tyres; 8,855 cartons of foreign frozen poultry products; and 2,758 bales of imported textile materials.

In addition, Dimka said that 1,561 cartons of medicaments (fake drugs) along with 7,493 bales of second-hand clothing and 5,642 cartons of other contraband items were equally impounded by the unit during the year under review.

“A comparative analysis of the above seizure report and duty recovered with same reports of year 2014 shows a geometric growth in result of suppressing smuggling within the zone. The current seizure report with duty paid value are 29% and 50% in increase respectively when compared to seizure report of year 2014 that recorded 363 seizures with Duty Paid Value DPV of N1,805,843,064.00.

“This increase also featured in the current report on duty recovered through DN issued as the increase represented in percentage of 81% is above the sum of N72,762,029 recovered on 59 Demand Notice (DN) issued and recorded in year 2014,”he said.

The CAC, who denounced the upsurge of smuggling activities in the country despite stiff penalties for culprits arrested, warned those still trapped in the illicit business to desist forthwith in their own interest.

He said that the NCS has been fortified to deal with the nagging problem of smuggling being perpetrated by some unpatriotic individuals who are desperate to make quick money to the detriment of the nation’s economy.

While assuring that the NCS under the leadership of the Comptroller-General, Hameed Ibrahim Ali would continue to apply decency and professionalism in the discharge of its statutory responsibilities, he added that officers found guilty of official misconduct must be dealt with accordingly.

He however decried media attack and blackmail against the NCS by some sections of the media and enjoined such institutions to always contact his office for verification of facts whenever necessary.

Dimka appealed to members of the public with useful information about smugglers, their agents, sponsors and collaborators, to contact law enforcement agencies for prompt action, while assuring that such vital information would be handled with utmost confidentiality.