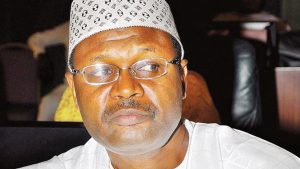 The commission also expressed concern over the rate of conflicting orders emanating from courts of coordinate jurisdiction, describing it as a threat to its work and democratic development in Nigeria.

Chairman of INEC, Prof. Mahmood Yakubu, said this in Abuja, during the third quarterly meeting of the commission with political parties.

He said, “What is most disconcerting for us is that the more INEC strives to improve the credibility and transparency of our electoral process, the more extraneous obstacles are put in our way through litigation. However, the Commission appreciates the recent statement by His Lordship the Chief Justice of Nigeria as well as the strongly worded concern by the Nigerian Bar Association.”

He also explained that stakeholders, including leaders of political parties, had urged the commission to strengthen the voter accreditation process, especially with reference to the use of incident forms where the Smart Card Reader fails to authenticate the fingerprints of a voter.

Yakubu said such concerns were legitimate given the fact that the SCR successfully verifies any card that belongs to the polling unit for which it is configured, irrespective of who presents it.

He said, “Their apprehension, therefore, is that using the incident form to cover those whose fingerprints are not authenticated by the SCR, a voter may be able to use another person’s PVC to vote during an election.

“To address this concern, the commission attempted to introduce facial biometric authentication during accreditation of the voters using the Z-Pad tablet to complement the fingerprint process through the Card Reader before the Edo Governorship election in September 2020.

“However, the commission was not entirely satisfied with the pilot held in the Nasarawa Central State Constituency bye-election   in August 2020. We, therefore, suspended the idea to enable us to do some more work. Over the last one year, we reviewed the situation and we think we have found the appropriate technology to address it. The Z-pad was therefore only used to upload Polling Unit results to the IReV portal during elections.

“The functionality of the Z-pad has now been integrated into the IVED currently used for voter registration. On Election Day, the same device will be used for the Bimodal Voter Accreditation System for fingerprint authentication during accreditation and where it fails for facial authentication. We believe that this multi-layer process will eliminate the possibility of voting by identity theft using another person’s PVC.”