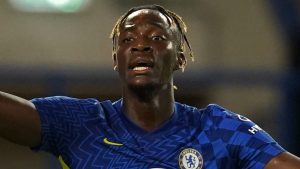 Striker Tammy Abraham has completed a 40m euro (£34million) move to Italian side Roma from Chelsea.

It is understood the deal for the 23-year-old England international includes a buy-back clause set at £68million.

“You can sense when a club really wants you – and Roma made their interest clear immediately,” said Abraham.

“Roma is a club that deserves to be fighting for titles and trophies. I’ve had the experience of winning major trophies and I want to be in those competitions again – so I want to help this team to achieve that and get to the level where Roma should be.

“It’s a massive honour to be the number nine at this club and I just can’t wait to get started and to help the team.”

Abraham, who has had loan spells at Bristol City, Swansea City and Aston Villa, flew to Italy on Sunday for a medical after Roma struck a deal with European champions Chelsea over the weekend.

Abraham, who has won six England caps, scored 30 goals in 82 appearances for Chelsea, having joined them at the age of seven.

The buy-back clause cannot be triggered until the Chelsea academy graduate has completed two seasons with Roma.

Chelsea director Marina Granovskaia said: “Tammy will always be welcomed back at Stamford Bridge as one of our own.

“We have all enjoyed watching his progress through our academy and into the first-team squad, and are grateful for his contribution to our successes at senior and youth level.”

Roma’s general manager, Tiago Pinto, said: “Despite still being very young, with a huge amount of potential to keep improving, Tammy has already played more than 200 games in his career and scored over 100 goals – and won a number of major trophies too.

“Choosing to leave the Premier League, and the club he grew up at, demonstrates very clearly just how much he believes in this opportunity to develop his own game and show what he can do at Roma.”