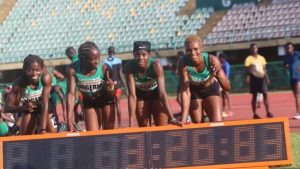 Imaobong Nse Uko, the fastest U-18 female 400 metres runner in the world, lived up to expectations on the opening day of the World Athletics U20 Championships in Nairobi, Kenya, running 52.33 seconds to qualify for the 400m final.

Uko, who has a personal best of 51.70s, was the youngest member of the Nigerian mixed relay team that set a new African record at the Tokyo Olympics.

She ran the fastest qualifying time in the semifinal heats and looks on course to becoming the third Nigerian girl, after Fatimah Yusuf (1990) and Bisi Afolabi (1994), to win the quartermile gold at the championship.

The final comes up on Saturday and the 17-year-old will run from lane six. She is the only Nigerian that made it to the final.

Also through to the final is the country’s 4x400m mixed relay team who also ran the fastest time in their heat and set a national record time of 3:21.66 in qualifying for the final this evening at the Kasarani Stadium in Nairobi.

In the 100m, the trio of Godson Oghenebrume, Praise Ofokwu and TimaGodbless qualified for this evening’s semi-final. Oghenebrume ran 10.35s to win his heat while his compatriot, Favour Ashe (11.00s) disappointed as he finished seventh to crash out of the blue ribband event.

In the women’s 100m, both Ofokwu and Godbless made it to the semi-final. Ofoku ran 11.65s to win heat two of the first round while Godbless was second (11.59) in the third heat behind Namibia’s Beatrice Masilingi who ran a new 11.20 national record to win.