Why The NPA Boss was Sent on Indefinite Suspension 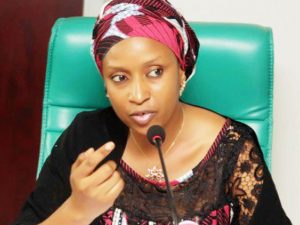 President Muhammadu Buhari approved the suspension of the Managing Director of the Nigerian Ports Authority (NPA), Hadiza Bala-Usman, to allow for investigation into allegations against her according to a statement from the presidential spokesperson, Garba Shehu.

However, there are indications that the suspension has to do with a Tweet by Hadiza Usman which some within the Presidency deemed critical of the security situation in the country.  Ms. Bala Usman had on February 27, 2021 tweeted that “The state of insecurity in the country that has led to the kidnapp of Kagara boys and Zamfara girls need to be addressed URGENTLY…We cant go on like this! Rescue our children and Secure our country that’s all we ask #SecureNorth #Secure Nigeria…

Some believe that the tone of the above tweet did not go down well with some powerful people within the administration as they threatened to make her pay for “such effrontery”.

Ms Bala-Usman, was first appointed as the NPA MD in 2016. Her tenure was renewed for another five years in January this year.

Mr Shehu did not disclose details of the allegations against Ms Bala-Usman but said Mohammed Koko has been appointment as MD in acting capacity. Until his appointment, Mr Koko was the Executive Director Finance in the agency.

Full statement by Mr Shehu below.

President Muhammadu Buhari has approved the recommendation of the Ministry of Transportation under Rt. Hon. Rotimi Amaechi for the setting up of an Administrative Panel of Inquiry to investigate the Management of the Nigerian Ports Authority, NPA.

The President has also approved that the Managing Director, Hadiza Bala Usman step aside while the investigation is carried out. Mr Mohammed Koko will act in that position.

The panel is to be headed by the Director, Maritime Services of the Ministry while the Deputy Director, Legal of the same ministry will serve as Secretary.

Other members of the panel will be appointed by the Minister

Senior Special Assistant to the President