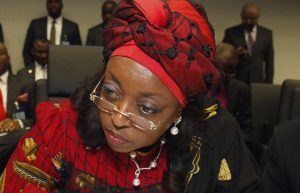 The chairman of the Economic and Financial Crimes Commission (EFCC), Abdulrasheed Bawa, has said $153 million and over 80 properties have been recovered from a former Minister of Petroleum Resources, Diezani Alison-Madueke.

Mr Bawa said the 80 properties recovered from Mrs Alison-Madueke were worth about $80 million.

The EFCC boss made the disclosure is an interview in the April edition of the commission’s magazine, EFCC Alert.

The publication was part of excerpts from the interview Mr Bawa had during One-on-One programme of the Nigerian Television Authority (NTA).

Until his appointment as the EFCC chair in February 2021, Mr Bawa headed the commission’s investigative team set up to probe the broad corruption cases involving the former minister, associates and their interests.

Mrs Alison-Madueke, who is believed to have escaped to the United Kingdom and remained there after her exit from public office, ran the petroleum ministry which superintends over the opaque Nigerian National Petroleum Corporation (NNPC) between 2010 and 2015 under the administration of former President Goodluck Jonathan.

Her name has featured either as the main defendant or an accomplice in numerous corruption cases filed in court by the EFCC since her exit from office.

Bringing her back to Nigeria to face pending charges against her has proved to be a hard nut to crack for the EFCC.

Asked in the interview to give an update on the progress in the cases involving the former minister, Mr Bawa said the $153 million recovered from her was in respect of one of the cases.“There are several cases surrounding that. As you may have read, I was part of that investigation, and we have done quite a lot. In one of the cases, we recovered $153 million; we have secured the final forfeiture of over 80 properties in Nigeria valued at about $80million,” he said.