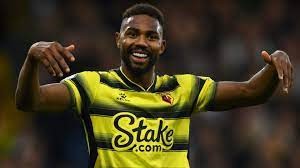 West Ham are interested in signing Emmanuel Dennis from Watford this summer but will have to be ready to part with an amount in the range of £20 million to £30 million for the Nigerian striker, according to The Mirror.

The 24-year-old, The Mirror reports, is set for talks with Watford owners next week to discuss his future. Dennis is likely to get a move away from Vicarage Road with the Hornets set for life in the English second tier next season, following their relegation.

Dennis has bagged 10 goals and six assists in 33 Premier League games for Watford so far this season, and is a constant menace for opposing defenders due to his on and off-the-ball movements and fantastic work-rate.

West Ham fans already know all about the Nigerian, who can play on either wing as well as through the middle, as scored against them with a brilliant strike at Vicarage Road earlier this season.

Hammers manager David Moyes will be keen to bolster his attacking ranks at the London Stadium in the summer, as Michail Antonio is currently the only option available to the Scotsman through the middle.

Antonio has run himself into the ground for Moyes this season but the Jamaica international’s performances have dwindled at times, scoring just twice in the Premier League since the turn of the year.