The governor of Kaduna State, Nasir El Rufai, has again admitted that the Nigerian authorities know the camps, the identities and listen to the conversations of the armed groups that are terrorising large swaths of the North-west region.

The governor, who was speaking after some bandits, ambushed and attack a train bound for Kaduna to Abuja on Monday evening. 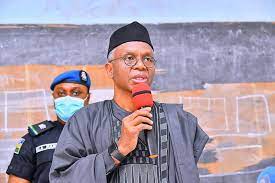 At least eight people were killed during the attack which lasted for almost two hours. Several passengers sustained gunshot injuries while a yet to be determined number of people were kidnapped by the gunmen.

Mr El-Rufai was speaking at an event attended by the transportation minister, Rotimi Amaechi, to update Nigerians on what the government was doing to stem the tide of banditry in the state after Monday’s deadly attack.

The governor explained in utter confusion why the military has not bombed the bandits despite knowing their whereabouts and listening to their conversations.

“We know where their camps are. We know their camps, we have the maps; we know everything. We have their phone numbers and listen to their conversation sometimes. But it has to be done across the five states,” he said.

The governor explained the military was originally reluctant to bomb the camps of the bandits to avoid civilian collateral damage but added that since a Nigerian court has declared them terrorists, the rule of engagement has changed.
“This is war, “ he said.

“We know what they (terrorists) are planning. We get the reports. The problem is for the agencies to take action. Don’t wait until they attack before you respond. The Army should go after their enclaves to wipe them out. Let the Air Force bomb them,” he said.

The visibly angry Mr El Rufai lamented the SSS has informants all over the place sourcing information for the service, but such attacks still happen.

Mr El-Rufai then said the attack could have been avoided if the Nigerian Railway Corporation had listened to his warning to end late evening shuttles.

He said the state security council wrote twice to the NRC on the possibility of suspending the nighttime shuttle, but the NRC did not listen.

The last train from Kaduna to Abuja should leave by 4 p.m. so that it will get to Abuja in daylight, he said.

The managing director of the NRC, Fidet Okhiria, confirmed that the Kaduna State government warned the corporation. He told journalists that if the corporation stops the evening shuttle; it means the bandits have won against the country.

“They wrote to us suspecting they wanted to attack the train, but that was in December/January. But we looked at it and said if there is something like that, they should find a solution to it and stopping the train is not the solution.

“And we don’t run night train. The last train leaves in the evening. We believe if we stop the running of trains, it means the terrorists have won.”