Southeast leaders, comprising notable Ndigbo voices, both apolitical and of various political persuasions, yesterday, made a strong case for the presidency of the country to emerge from the zone in 2023. They insist that for equity, justice, fairness and inclusiveness, the Southeast should be given the chance and supported by all fair-minded and patriotic Nigerians to produce the next president. 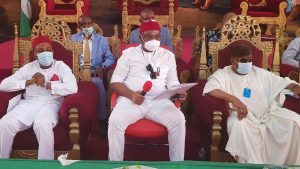 They made the demand at a world press conference under the umbrella of Ahamefuna socio-cultural organisation, hosted by former governor of Enugu State, Dr Okwesilieze Nwodo, in Enugu.

Chairman of the conference, Chief Iwuanyawu, said the Igbo was currently facing one of their greatest challenges and traced the history of the amalgamation of Northern and Southern Nigeria, where he noted that the Igbo played a pivotal role in shaping the country.

He said it was only in Nigeria that champions and independence protagonists were not allowed to rule the country, citing the late Dr Nnamdi Azikwe as a typical Igbo and Pan-Nigerian, who unfortunately was not allowed to lead the country after being in the vanguard for Nigeria’s independence.

“All through history, we have been demanding for what truly belongs to us. What else could be injustice, where then lies equity, justice and fairness when there was agreement that power should rotate between Northern and Southern Nigeria?

“Now that it is the turn of the Igbo, people have started shifting grounds. We want a field where everybody could play. Nigerians should please be honest for at least once,” Iwuanyawu pleaded.

Delivering the text of the conference, Senator Obi said it was only the Southeast, in the three zones of Southern Nigeria, that has not yet had a chance to produce a Nigerian President.

Obi said the Igbo have taken the campaign to major political and cultural leaders of other ethnic nationalities in the country, where many of them spoke out publicly in support of the Southeast quest for the presidency in 2023.

“Our response to detractors is clear. In this, we demand to be treated fairly and given a chance to participate as a full member of the Nigerian project,” he said.

“In the South-South, the support the Igbos gave to the candidacy of Jonathan was total and unwavering. That support has cost them a lot in terms of extreme marginalisation in government affairs since President Buhari came to power in 2015.

“Igbo exclusion from government is continuing; a situation that was helped again by the strong Igbo support for Alhaji Abubakar Atiku in 2019 elections. Igbos without counting costs have supported other zones to produce presidents of Nigeria. Now that it is our turn, we ask for reciprocal support for the Southeast to produce a Nigerian president with the capacity and confidence to deal with Nigeria’s numerous problems.

“We are therefore asking all political parties, but in particular, the two major parties, the All Progressives Congress (APC) and the Peoples Democratic Party (PDP), to zone their presidential tickets to the Southeast in demonstration of the equity and fairness, without which our efforts at nation building would be futile,” he said.

Reading a statement after the meeting, former Chairman of the Niger Delta Development Commission (NDDC), Chief Onyema Ugochukwu, stated that Southeast has suffered monumental marginalisation since the end of the civil war, stressing that the marginalisation has reached new levels in the last seven years.

The Southeast leaders noted that Nigeria has a zoning and rotational culture for the presidency. This agreement on rotational presidency was reached at the 1995 Constitutional conference. That rotation, it says favours Southern Nigeria at the end of President Muhammadu Buhari’s tenure in 2023.

“When the presidency rotates to Southern Nigeria, the zone that most deserves it is the Southeast, as other zones have occupied the seat before.”

Meanwhile, the apex Igbo socio-cultural organisation, Ohanaeze Ndigbo, yesterday, hinged the naming of the Second Niger Bridge after President Muhammadu Buhari on his support for the emergence of an Igbo man as his successor.

The body spoke on the background of the Indigenous People of Biafra (IPOB)’s rejection of Federal Government’s purported plan to name the Second Niger Bridge after President Buhari when completed.

National Publicity Secretary, Ohanaeze Ndigbo Worldwide, Chief Chiedozie Alex Ogbonnia, who spoke to our correspondent on phone on the matter, said naming of the project is sensitive and plays on the emotion of the people.

According to him, in a real democracy, people should be allowed to name a major road coming into Igboland, considering the sensibility of the Igbo towards Buhari. “For example, the Nnamdi Azikiwe University is so named because he is loved in Awka, Michael Okpara University was named after Okpara because of the role he played in Igboland.

Also, adding his voice to Ndigbo agenda, veteran Nollywood actor, Pete Edochie, has stated that having an Igbo presidency will end looting and socio-economic woes, adding that Igbo can deliver strategic leadership that will transform Nigeria. He made this known during a BBC Igbo programme highlighting concerns about political marginalisation.

According to the legendary actor, successful Nigerians in early times were people of Igbo extraction.

He said: “In 1956 when Queen Elizabeth visited, it was the vehicle of an Igbo man, Odumegwu Ojukwu, that was used to convey her, since he was one of the richest black men at the time. He never asked to be paid. Successful Nigerians in those early times were people of Igbo extraction: Power Mike in boxing, Chinua Achebe in literature, even Ben Enwonwu, the Nigerian who painted the Queen at the time, was Igbo.

“The problem in Nigeria is greed. Leadership is dominated by Northerners but, 60 years after independence, we’ve not ended the electricity problem, when coal-based Oji River supplied power to the whole east before the civil war,” he regretted.