Former Super Eagles defender, George Abbey, has said the team’s failure to make the 2022 World Cup should be a wake-up call to football authorities in Nigeria.

Abbey said this in reaction to Nigeria’s 1-1 draw with Ghana in the World Cup playoff. The stalemate sent the Black Stars to the competition on the away-goal rule after the first leg ended goalless. 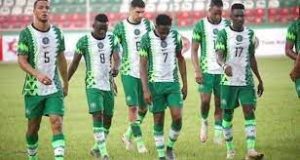 But George believes the development is a reality check on the three-time African champions. According to him, there are cracks in the team, explaining that the players could not pay attention to the “little details” during the double-legged game.

“This is a blessing in disguise because if we had made it to the World Cup, it kind of papers over the crack; it seems like everything is well.

“We need to reset, we need to find a way to plan and put in place a better quality organisation on and off the pitch,” George said on Channels Television’s Sports Tonight, hours after the game.

As far as the former Sharks player is concerned, there is a gulf in quality between the present Super Eagles team and other top African nations.

“We would have gone to the World Cup and probably end up losing all our group games and come back with an embarrassing showing at the World Cup,” he argued.

“So, we don’t want that. We want to be better prepared so when we get there, we deserve to be there and we can hold our own against these top teams.”

He also faulted the players for not putting up a fighting spirit during the fixtures.

“When you put on that Super Eagles jersey, the whole nation is expecting you to go to war for us,” George, who played at the 2004 Africa Cup of Nations, added.

“This is not a time when you want to come and entertain; show skills and dilly-dally on the ball; take your time. Everything has to be crisp. From the start, we need warriors. We need players who are ready to bleed for the nation and I did not see any of that.”