Ghanaian journalist Richard Achampo has sensationally revealed that some football fans in the country did not initially want the Black Stars to qualify for the Qatar 2022 World Cup ahead of Nigeria. 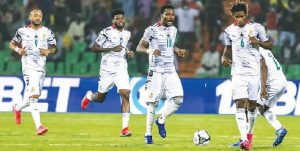 Ghana on Tuesday piped Nigeria to the World Cup ticket, thanks to the away goal rule, after both play-offs legs ended 1-1, which was enough to help the Black Stars qualify for the global football showpiece in Qatar.

It is the first time the Eagles will fail to qualify for the World Cup since missing out on the 2006 edition.

Despite the wild celebrations in Ghana after the Black Stars’ spirited display at the packed 60,000-capacity Moshood Abiola National Stadium in Abuja, Ghana journalist, Achampo said the home fans weren’t initially in support of their team.

“Qualifying for the World Cup is good news for Ghana but back home, before this fixture, a lot of people were not in support of Ghana’s qualification because they feel that Ghana have been to the World Cup three times and there is nothing to show for it in terms of facilities,” Achampo said.

“A lot of people feel that when Ghana qualifies for the World Cup, it is only to the benefit of the players and the officials, so, some people didn’t want them to qualify but all that changed when the president of the country appealed to them and after the first leg in Kumasi, they fell back in love with the team and I’m sure they’re delighted now.”