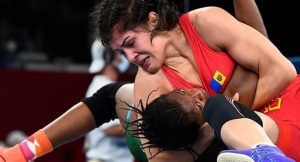 It was another hope dashed as Nigerian wrestling sensation, Odunayo Adekuoroye suffered a shocking defeat and will not compete for a medal in the Women’s Freestyle 57kg category at the Tokyo Olympics.

In a swift turn of events, with just a minute of fight time remaining, second seed Adekuoroye lost 8-2 via pinfall to Mongolia’s Anastasia Nichita despite leading the bout 8-0 in the round of 16.

The African champion was in total control, suddenly, Nichita found a way to bring her down and pinned her till the referee declared it over. Stunning victory for the Mongolian. Adekuoroye’s hopes to compete for bronze through the repechage was dashed when Nichita lost 6-3 to Bulgaria’s Georgieva Nikolova in the quarter-finals.

Things got worse for Team Nigeria on the mat as the only male wrestler, Ekerekeme Agiomor, who is making his Olympics debut lost by technical superiority 1-12 to Deepak Punia of India in the Men’s Freestyle 86kg.

Nigeria’s only chance to compete for another wrestling medal is on youngster AdijatIdris who will wrestle in the Women’s Freestyle 53kg tomorrow.