The Speaker And The Journalists At A Press Conference 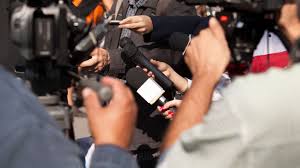 ANY question put by a journalist to the speaker at a press conference that does not upset the speaker or disrupt their emotions cannot elicit quality news items from them. However, the response to a question that makes the speaker comfortable can produce a good entertaining story and can also make good public relations (PR) content.

Press conference is not a guided or structured interview session. Neither are journalists invited to a press conference to cheer on the speaker. Unfortunately, most modern journalists in Nigeria have mistaken their profession as PR. That is why some of the very important politicians (VIPs) – real and apparent – see them as ‘public relationists’. What a mistaken identity caused by journalists themselves, their work environment and the country’s value orientation. For sure, a student can ask their lecturer what can be considered an awkward question during a lecture. Usually, lecturers, more precisely good lecturers, should not consider any question as awkward.

As much as journalists are free to ask questions including those that may wrongly be considered rude or awkward, the speaker also has the right to parry any question, or twist it and answer it as twisted, or throw it back at the questioner and other journalists present at the conference as an assignment. When the speaker throws back the question, they only need to remind the journalists about investigative journalism. Or better still, a press conference speaker is at liberty to ignore outright any question that can trigger their temperament. At a well-attended press conference at the Ekiti State Governor’s office in Ado-Ekiti in late 2001 or early 2002, this writer asked Otunba Niyi Adebayo, the State Governor, two vexed questions in a very direct manner devoid of journalistic diplomacy.

The writer was then an inexperienced ‘journalist’ who was just beginning to learn on the job – a complete tyro in the profession. Moreover, he trained as an engineer in the then Ondo State University, Ado-Ekiti (OSUA), now Ekiti State University, Ado-Ekiti (EKSU). The first question was on the court case his administration instituted against the Ondo State government on the sharing of assets between the two states after the creation of Ekiti State from the old Ondo State. The second was on the outstanding pension his government owned retired teachers in the state. Mr Governor got obviously upset with the first question in particular but yet he took his time to explain painstakingly the reasons why he chose the legal option without insulting the questioner.

Governor Adebayo parried the second question. The questioner, who is this writer, was dissatisfied and drew the Governor’s attention back to the question with some facts of the matter. Governor Adebayo asked if the questioner was a retired teacher. Everyone laughed! Truly yours told the Governor that his mother is a retired teacher – the truth. The governor said, at a speed of thought, that the journalist who asked the question should see him in the office after the media interaction. The hall erupted into laughter. Mr Governor himself laughed. And that ended the matter. In his scholarly article, ‘What Makes a Leader?’ in Harvard Business Review (HBR), Daniel Goleman postulates that the best leaders have a high degree of emotional intelligence (EI).

According to him, great leaders have, among other EI skills, self-regulation skills which is the ability to control or redirect disruptive impulses and moods. Goleman asserts that a leader who has a gift for self-regulation always chooses a careful, reasonable and calm approach to issues. It is the candid opinion of this writer that real leaders are known to stay and remain cool, calm and collected when their emotions and characters are tested. However, leaders are humans. It is human to lose temper even for the flimsiest reasons.

But the best leaders own up to their deplorable behaviours and take responsibility for their reprehensible actions. But who really is a leader? That is a topic for another day. Any press conference speaker who insults a journalist for asking them a question at the conference harms their own reputation, if they have any.

Akinola, an engineer and polytechnic lecturer, writes in from Ibadan.