Six die in clash over fish pond in Benue 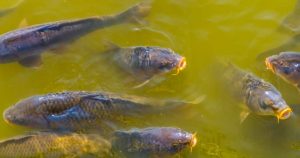 Six persons were reportedly killed on Monday in Egba community in the Agatu Local Government Area of Benue State over fish pond.

Recall that the fish pond had been a source of dispute between some communities in Egba in which several people have been killed.

The chairman of the Agatu council, Sule Adoyi, confirmed the crisis on the telephone, but said information was still scanty. He, however, said there was a fresh crisis in the area caused by fish pond adding that the crisis broke out around 10am on Monday.

Adoyi said security operatives have been deployed in the area.

“Six persons have so far been killed and it is purely a communal problem,” the chairman said.

The state Police Public Relations Officer, DSP Catherine Anene, confirmed the death of some persons in Agatu on Monday over a fish pond dispute.

The PPRO said the disagreement over the fish pond had been an age long one, adding that a peace meeting was held over the matter and that the issue was still being attended to