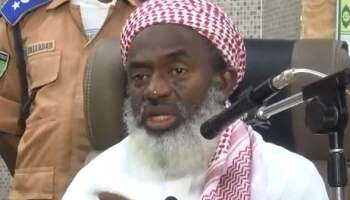 Some mothers of the kidnapped students in Kaduna have accused an Islamic cleric, Sheikh Ahmad Gumi, of taking advantage of their challenges to make money. Speaking to journalists, the aggrieved parents narrated their ordeal in Gumi’s house.
Thirty-seven students of the Federal College of Forestry Mechanisation, Afaka in Kaduna State were kidnapped in their school by bandits on March 11.
Ten of them have been released in batches of five each, leaving 27 students with their abductors.
The controversial cleric has been criticised by some Nigerians for his position that government should negotiate with bandits and yield to their demands.
One of the mothers said, “They took us to Gumi’s house. He directed us to an Ahmed, who invited a Fulani man from Kaduna. We contributed N800,000 for him; he told us that was just for transport. I cried and pleaded with him, saying I’m a widow, that I do not have a husband. I am training the boy to help me tomorrow. He said it wasn’t his concern.
“Initially, they were after the government to pay the N500 million (ransom). But they later started calling, persuading us to talk to  government to pay the money. I told them that I don’t have access to the government. After they called for two weeks with no results, they asked me, how much have you people raised, and I asked ‘which people’. They said you parents, and I told them that the parents do not have money, we are poor people, we don’t have any money to contribute. They now said, so if the government does not pay, you will allow your children to die?”
Gumi on Tuesday urged the government not to take the threat by the kidnappers of students of Greenfield University, Kaduna, lightly. In an interview with Punch, Gumi noted that the Central Bank of Nigeria should pay the N100 million ransom demanded by the kidnappers of the students.
He made the call as a parent of one of the abductees lamented that the kidnappers were insisting on a ransom of N100 million.
No fewer than 22 students and a member of staff of the university were abducted in the school on April 20, 2021. Five of the students were later  killed by the bandits.
It was reported on Monday, that one of the bandits, Sani Jalingo, in an interview with the Hausa service of the Voice of America, demanded N100 million and 10 motorcycles for the students to be freed.
He threatened that failure of the Kaduna State Government or families of the students to meet the demands by Tuesday (yesterday), would lead to the death of the abductees.
However, a parent pleaded with the federal government and corporate organisations to do everything possible to rescue the students.
He said, “The bandits still stand their ground of demanding N100million and ten motorcycles; no individual negotiation.
“We are calling on the government to do whatever it can to see to the release of our children. Our children have stayed long in the forest.
“We don’t know the state of their health at the moment. We don’t know whether they are being fed or how they are treated by the bandits.
“All that we can say now is for the government of the day, especially, the Federal Government and well-meaning Nigerians to come to our aid. We can’t afford the N100 million and the motorcycles demanded by the bandits.
“We are also calling on corporate organisations to come under their corporate social responsibilities to assist us to get our children out of the bandits’ den.”