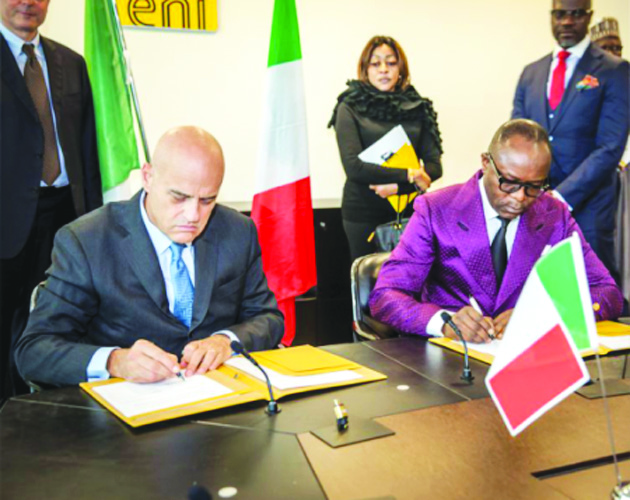 Nigerian National Petroleum Corporation and Eni, the Italian oil giant sign a Memorandum of Understanding for the rehabilitation of the Port Harcourt Refinery 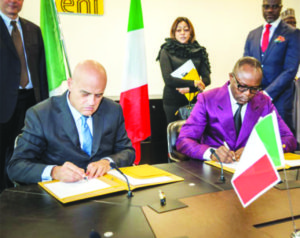 As part of the Federal Government efforts to tackle the challenges of petroleum products supply and fix electricity shortfall, it recently sealed a deal with Italian oil giant, Eni to revamp the Port Harcourt Refinery Company (PHRC) and build Phase 2 of the Okpai Power Plant.

The agreement was signed in Rome, Italy at a meeting between Dr Ibe Kachikwu, Minister of State for Petroleum Resources and the officials of Eni. The meeting ended with the signing of a Memorandum of Understanding (MOU) between the Eni and the Nigerian National Petroleum Corporation (NNPC) with ENI committing to the refurbishment of the Port Harcourt Refinery, building of Phase 2 of the Okpai Power Plant and further investing in Nigeria’s oil and gas industry worth billions of dollars. Eni plans to double power generation capacity at the 480 megawatts Okpai Independent Power Plant (IPP) in Delta State, which was built by its local subsidiary Nigerian Agip Oil Company.

Kachikwu signed the MoU on behalf of NNPC, while Claudio Descalzi, Chief Executive Officer of Eni, signed on behalf of the company.

At the meeting, Kachikwu made a presentation to top executives of Eni and urged International Oil Companies (IOCs) to invest in building refineries in Nigeria. He also enjoined them to move beyond just the business of crude exploration to firmly support the vision of enhancing local production of petroleum products by building refineries in the country. He said that the major plan of the Federal Government is to stop importation of petroleum products in the long term, adding that it would be expedient that every IOC should invest in building a refinery with a chain of distributions.

He reiterated the urgent need for the building of refineries and power plants to drive the country’s economy. He also clarified that the refineries could be built by the IOCs, and within a short period of time, investment in the venture could be recouped by direct sales model.

He gave a historical background of the challenges of the sector by stating that the investment is necessary now more than ever, considering the fact that Nigeria’s refineries which were built in the 1970s and 1980s are presently working at sub optimal levels and could sufficiently cater for local needs, hence, the country is heavily dependent on product importation which creates instability in supply and price of products in the country.

The attempt by previous governments to privatise refineries and attract investment failed to yield the desired result. The present government had promised to correct this by upgrading old refineries and building new ones, thus increasing local production capacity with a view to reducing importation of petroleum products by 60 percent in 2018, and by 2019 to become a net exporter of petroleum products and value added petrochemicals.

The MoU between Nigeria and the Italian oil giant is inline with the Federal Government’s commitment to the full implementation of the 7 Big Wins; — the roadmap that focuses on the short and medium term priorities to grow Nigeria’s oil and gas industry.

In continuation of the ongoing investment drive in Italy, Kachikwu also held talks with Italy’s ministers of foreign affairs and economic development and formalised the new trend of cooperation between oil majors and Nigeria.