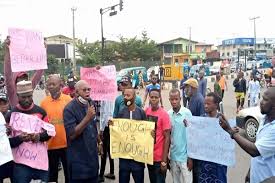 Nigerians have marched in the streets of Osogbo, Osun State capital, in protest against the recent hike in electricity tariff and petrol price in the country.

Hundreds of demonstrators converged at Freedom Park, Osogbo, around 8:30 a.m. before blocking major roads in the state capital.

They came out with different placards showing different inscriptions. Some of the inscriptions read: ‘Enough is Enough!’, ‘Revert Pump Price Now!’, ‘All We Want Is a Better Life’, ‘Electricity Tariff Hike Is ill-Conceived’, among others.

One of the protesters, Biodun Alli, told PREMIUM TIMES that he joined the protest on “an empty stomach”.

“I have not eaten today but happy to join the rally. We must tell the government that things are not working and a radical approach is not a bad idea,” he said.

The electricity distribution companies (DisCos) across the country started the implementation of a new electricity tariff regime, on Tuesday, following the Nigerian Electricity Regulatory Commission instruction that DisCos are to maintain a N4 tariff for all customers consuming less than 50kWh of energy per month.

In addition, petrol prices have been increased three times in the last three months with a litre now currently sold at N162 since the beginning of September.

Many Nigerians have condemned the latest development and called on opposition leaders to lead protests.

The Osun State police spokesperson, Yemisi Opalola, told PREMIUM TIMES that the police are maintaining orderliness at the protest.