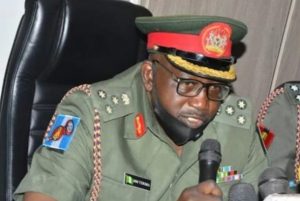 The Federal Government has begun profiling towards prosecution, well-placed Nigerians suspected of being financiers of terrorism in the country.

Briefing journalists on Friday in Abuja, the Minister of Justice and Attorney General of the Federation, Abubakar Malami said the arrest of the suspects followed the recent convictions of some Nigerians on terrorism financing in the United Arab Emirates (UAE).

He said that investigations conducted have established reasonable evidence of the involvement of the highly placed individuals, businessmen and institutions across the country in financing the Boko Haram terrorists.

“As you will actually know, sometimes back there were certain convictions of Nigerians allegedly involved in terrorism financing in the United Arab Emirates (UAE),” he said in reaction to the extent of prosecution.

“That gave rise to wider and far-reaching investigations in Nigeria and I’m happy to report that arising from the wider coverage investigation that has been conducted in Nigeria, a number of people, both institutional and otherwise, were found to be culpable.

“I mean a reasonable ground for suspicion of terrorism financing has been established or perhaps has been proven to be in existence in respect of the transactions of certain higher-profile individuals and businessmen across the country.”

Although Malami declined to disclose names of the terrorist financiers nor the number of those found culpable, he simply stated that a large number of persons were involved, adding that he is not at liberty to disclose further, as investigations (which have reached an advanced stage) and profiling continue.

He added, “I’m happy to report that investigation has been ongoing for a long time now, and it has reached an advanced stage.

“Arising from the investigation, there exists, certainly, reasonable grounds for suspicion that a lot of Nigerians, high-profile, institutional and otherwise, are involved in terrorism financing and they are being profiled for prosecution.

“The message is clear: nobody is going to be spared, no stone will be left unturned. We shall certainly and aggressively pursue those people that are involved in terrorist financing as far as the Nigerian state is concerned,” he declared.

Nigeria has been grappling with series of security challenges ranging from Boko Haram terrorism in the northeast to banditry in the northwest, kidnapping for ransom in several parts of the country, ritual, agitations for secession among several others.

The country has been battling insurgency for over a decade with over 36,000 people killed and hundreds of thousands displaced in the northeast.

As part of measures to rejig the entire security architecture, President Muhammadu Buhari earlier this year replaced his four top military commanders in a bid to better combat the insurgency that has also displaced more than two million people from their homes since 2009.

ISWAP split from mainstream Boko Haram in 2016 and became a dominant group, launching attacks on military bases and ambushing troops while abducting travellers at fake checkpoints.

Since 2019, the army has mostly withdrawn from villages and smaller bases into so-called “super camps”, fortified garrisons meant to give better protection against attacks.

But critics say the strategy has left jihadists with more freedom to roam untouched in rural areas and made highways vulnerable to kidnappings and assaults.