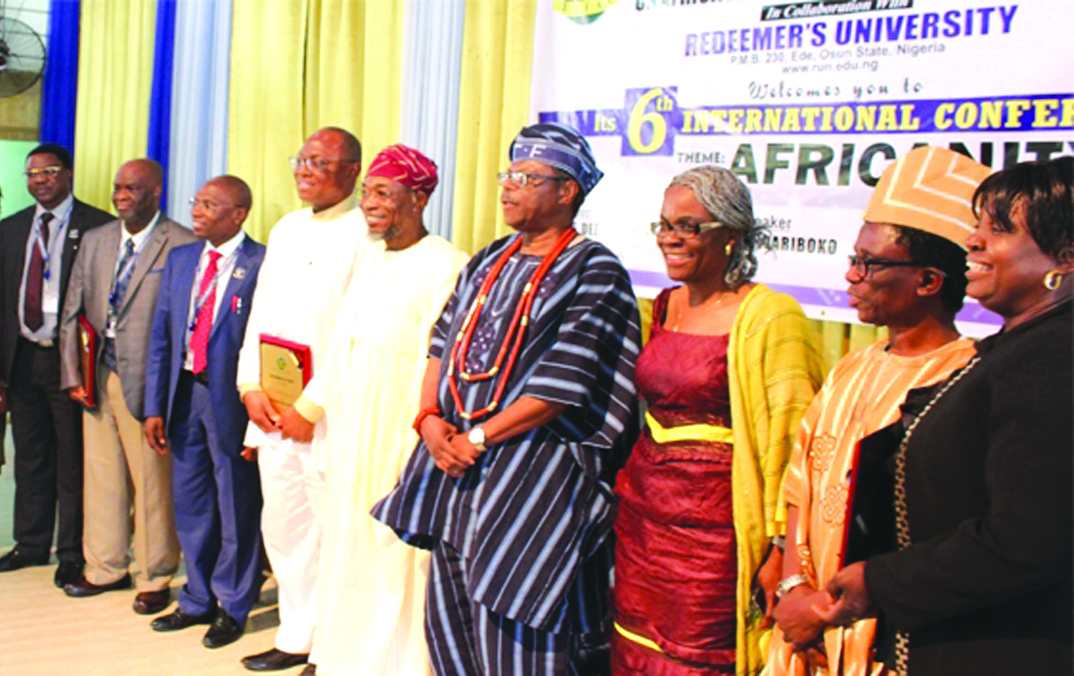 Dr. Nimi Wariboko, a first class Economist and Walter G. Muelder Professor of Economic Ethics at Boston University, United States of America recently emerged as the winner of 2016 edition of the prestigious Ali Mazrui Award for his distinguished contributions to scholarship and research excellence.

The award was conferred on Professor Wariboko during this year’s Toyin Falola Annual Conference on Africa and the African Diaspora (TOFAC), which brought together top African scholars and professionals from various disciplines. At the colourful award ceremony, which took place at Redeemer’s University, Ede in Osun State on July 4, this year, His Excellency Rauf Aregbesola, Governor of Osun State handed over the plaque to Professor Wariboko and congratulated him on the well-deserved honour.

The distinguished Professor of Economics/Ethics was visibly surprised when his name was announced as this year’s winner as he was only invited to deliver the keynote address titled : “Constructing Africa’s Greatness: The Neglected Path of Community, Narratives, and Care of the Soul.” He expressed gratitude to the TOFAC Board for considering him worthy of the honour.

Professor Ademola O. Dasylva, Chairman of TOFAC Board, said the award, which   is named after Professor Ali Mazrui, a foremost African scholar and world renowned intellectual, is designed to encourage African academics both at home and abroad  to be more committed to the propagation of knowledge that advance the course of Africa in the comity of nations. “Every year, the TOFAC Board receives nominations from scholars from all over the world and it meets to select the best nominee for the award in that year. Nominees and winner are not usually informed that they are either being considered for the award or that they have been selected. The winner only gets to know when his or her name is made public at the annual conference,” Professor Dasylva said.

On behalf of the TOFAC Board, a member, Professor Adeshina Afolayan of the Department of Philosophy, University of Ibadan later conveyed the news of the award to Professor Mary Elizabeth Moore, Dean and Professor of Theology and Education, Boston University School of Theology.

An obviously elated Professor Moore described the award as a confirmation of Professor Wariboko’s pedigree as a world renowned scholar in social and economic ethics. According to her, “We in the Boston University School of Theology value research and teaching and we are grateful for his global intellectual leadership. The Mazrui award is not only a well-deserved tribute to him, but also recognizes the significant value in the form of his research that draws deeply upon African and pan-African traditions and cultures.”

She thanked the TOFAC Board for recognizing her esteemed colleague and communicating the great honour to the institution.