Following Sunday’s acerbic response by the Presidency to their stance on the performance of the President Muhammadu Buhari administration, the Governors of the Peoples Democratic Party (PDP) have observed that presidential aide, Garba Shehu, the author of the statement against the opposition state chief executives, has been left dazed by the “sheer assemblage of facts, figures and evidence on the existential threat Nigeria is facing as a result of the APC misrule.” 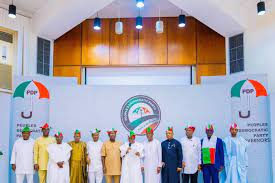 The Senior Special Assistant to the President on Media and Publicity had described the communique issued by the PDP Governors at the end of their recent meeting in Aba where they chronicled the alleged failure of the administration, as “a work of fiction by those who truly believe black is white and one plus one equals three.”

Shehu had maintained Sunday that the governors’ statement was of “the delusional” who sought to cover up “the serial and criminal failures of the PDP’s long and damaging period in office, which the Muhammadu Buhari administration and All Progressives Congress (APC) have strived these past seven years to repair.”

Signed by the Director-General of the Forum, Cyril Maduabum, the PDP-GF stated in its statement: “We are moved to respond to the infantile, ignorant, pedestrian, low quality, confused and rambling response of Garba Shehu, spokesman of the so-called Presidency, an amorphous entity, to the fact-filled patriotic, well thought out chronicle of the dire living conditions of Nigerians by the PDP Governors in their communiqué of March 23, 2022, for the need to set the records straight.

“Garba Shehu described the communiqué as a fantasy, delusional and fictional. He even derided Nigerian armed forces as ‘phantom soldiers.’ Perhaps he was dazed by the sheer assemblage of facts, figures and evidence on the existential threat Nigeria is facing as a result of the APC misrule, with respect to the economy, security, stealing of Nigeria’s crude, etc. as contained in the communiqué.

“It was John Adams who said that ‘facts are stubborn things; and whatever may be our wishes, our inclinations, or the dictates of our passion, they cannot alter the state of facts and evidence.’ The communiqué merely stated the facts.”

The statement argued that what the PDP governors said in their communique was the exact situation of the country under the present dispensation.

It added: “The PDP Governors communiqué made a comparative sketch of Nigeria of 2015 under PDP and Nigeria of 2022 under APC. The communiqué reeled out the fact that in almost all sectors, things have gotten worse by over 1000%. This is reflected in prices of basic foodstuffs, unemployment rate, electricity prices, kerosene, diesel, fuel, aviation fuel and air ticket prices which have all gone through the roof. It reeled out figures on poverty, inflation, exchange rate, debt accumulation and corruption.

“Indeed, all aspects of life in Nigeria are being systematically destroyed by the APC administration. Life has become short, brutish and valueless in Buhari’s Nigeria as insecurity ravages the land. But this is not the problem of Garba Shehu, who is enveloped in the Presidential Villa, totally oblivious of the suffering and agony Nigerians are facing.”

The statement asserted that the most worrying situation is that of the Petroleum sector, maintaining that given the depth of problems in it, President Buhari ought to have resigned as the Petroleum Resources minister.

The PDP-GF further stated: “The most disturbing aspect of misrule of the APC as chronicled in the communiqué is the petroleum sector.

“The stealing of Nigeria’s crude oil and the connivance of NNPC in shortchanging other tiers of government, namely, States and Local Governments is simply minded bogging, if not outright criminal. Nigeria now produces 1.1million barrels of crude oil per day. It has the capacity to produce 2.5million per day. It cannot even meet its OPEC quota of a 1.8million per day. NNPC is a law unto itself. Nobody can call them to order to desist from the part of lawlessness and unconstitutional acts it has chosen to dwell in.

“Of course, President Buhari is the Minister of Petroleum Resources. Under his watch, Nigeria’s Oil and Gas Sector is deteriorating. In an accountable government, he should have resigned his position as Minister of Petroleum, as a result of the cataclysmic failures in the sector.

“It is even shocking that Garba Shehu admits that funds from NNPC are now directly used to fund social and health programmes, road construction etc, in an unconstitutional overreach.

“Garba Shehu conveniently ignored the facts in the PDP Governors Communique that exposed the deduction of N788billion for NNPC’s own chosen projects without recourse to the Federation Account; the deduction of N8.3billion monthly for rehabilitation of refineries in Nigeria that do not work; the scandal called petroleum subsidy that gulps trillions of naira yearly without accountability and value for money. Between 2012 and 2021, N7.6T has been withheld by NNPC from the Federal Account. Yet, Garba Shehu kept mum on these scandalous disclosures.

“What did Garba Shehu say about 18 Federation Revenue Agencies that have refused to remit funds to the Federation Account in breach of the Constitution? Nothing! What impunity! What a robbery! What a reckless and whimsical approach to governance!

“The presumption is that we can talk as much as we want, since power resides in the Presidency, we can do nothing. But there will be a day for accounting. There will be a day of reckoning. When that day comes, the arrogance of power will not avail the perpetrator of these serial acts of theft of Nigeria’s patrimony.

The Forum was of the view that the present administration remains the worst in the history of the country in terms of managing diversity.

According to the statement, “The Buhari Presidency by all objective accounts is the worst in Nigeria’s history in managing our diversity. Under APC’s 7 years of rule, Nigerians no longer trust one another, and ethnic and religious differences are not properly managed. All our fault lines are exposed and exacerbated.

“Garba Shehu had the temerity to praise the military success under Buhari as compared to the PDP. That someone in today’s Nigeria can be this tone-deaf to the cheapening of life in Nigeria under the watch of the APC is, to say the least, unfortunate.

“The recent events in Kaduna have brought trauma and shame to Nigeria.