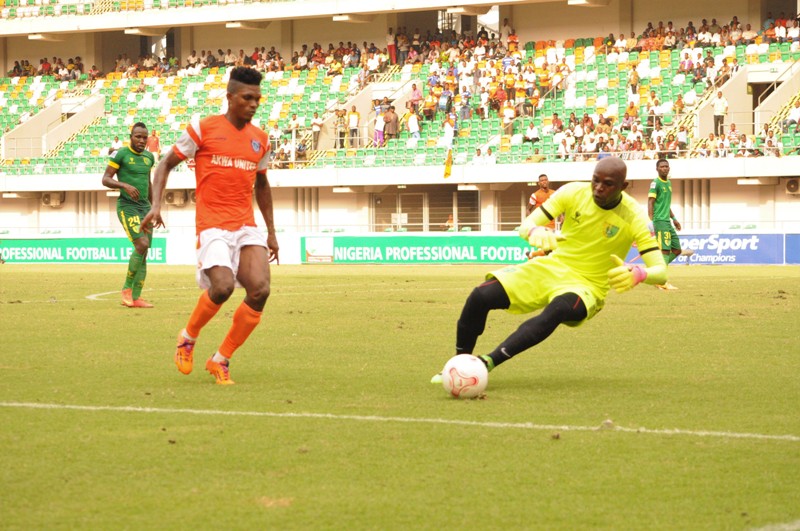 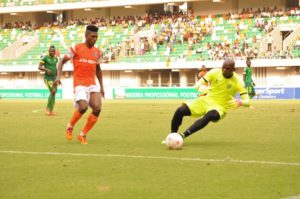 Plateau United’s unbeaten streak in the 2017 season of the Nigeria Professional Football League (NPFL) ended on Sunday following a 1-2 loss against Akwa United at the Godswill Akpabio International Stadium, Uyo. Despite the defeat, the Jos based club retained top spot on the league table with seventeen points haul from eight games.

The struggling Akwa United had showed their intent to pick the maximum points as early as the sixth minute when former Enyimba striker, Christian Pyagbara, rounded up Plateau United goalkeeper, John Gaadi to open the scoreline. Ibrahim Alhassan doubled the lead five minutes into the second before substitute Chima Ndukwu pulled one back for Plateau United in the 60th minute.
In Lafia, Nasarawa United thrashed Abia Warriors 3-1. The home side took the lead inside the first minute when Abdulrahman Bashir scored from a Thomas Zenke pass. Abia Warriors equalised two minutes later through Sunday Adetunji, before Douglas Achiv restored the lead for Nasarawa United in the 16th minute from a free kick. Thomas Zenke sealed the victory in the 55th minute to ensure Nasarawa United ran out with 3-1 victory.
El-Kanemi Warriors also thrashed Gombe United 3 nill in Maiduguri. Bello Korfamata opened the scoring for El-Kanemi in the 8th minute, before Samuel Mathias’ brace in the 26th and 45th minutes respectively sealed the comfortable victory for the home side.
In Akure, ABS battled struggling Sunshine Stars to a 2-2 draw. ABS took a surprised lead in the 11th minute through Ernest Governor before Ayo Saka equalized for the home side from the penalty spot in the 33rd minutes. Sunshine thought they were coasting home for victory when Alaba Adeniyi fired them ahead in the 41st minute but ABS players were not done yet. The visitors were eventually rewarded when Adeshina Gata drew the game level in the 55th minute and held on to snatch a point in Akure.
Enyimba’s quest to snatch a point from Niger Tornadoes in Lokoja failed to materialize, no thanks to a 13th minute strike by Sadiq Suleiman and Terna Suswam’s red in the 60th minute which ensured the Peoples Elephant played the remaining 30 minutes plus with ten players.
Lobi Stars and Katsina United played goalless draw in Makurdi with John Lawrence taking the blame for the failure of his side to pick maximum points in the game. The home side got a penalty in the 37th minute which John Lawrence kicked skyward, missing the target.
By Olisemeka Obeche