“No Development Without Peace” — Buhari calls for unity in Kaduna 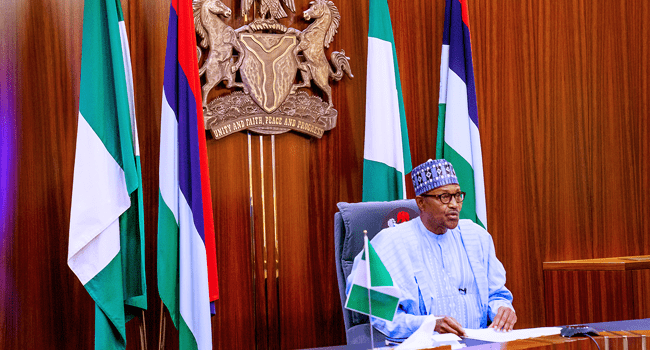 The president passionately called on all indigenes of Kaduna to cooperate with the government and security agencies to secure “peace and harmony in the state.”

Buhari’s call for peace comes amid recent efforts to secure the state from incidents of banditry and violent crimes.
For example, Southern Kaduna has seen the worst of ethnic violence this year, prompting the federal government to send Special Forces to the region.

Earlier on Monday Governor Nasir El-Rufai, said he was committed to ending the Southern Kaduna issue, which he says dates back 40 years ago.

“We must live together as brothers and sisters because without peace, development cannot take place,” Buhari said at the end of his speech, which was effusive with praises for the state government’s work in promoting job-creating investments and building infrastructure.

The governor, El-Rufai during his opening presentation at KADINVEST, touted his administration’s economic successes.

The Governor said the state has attracted more than $800 million of local and foreign investments since 2016.

He also said the state has had investment announcements of over $2.1 billion in 2020, far ahead of Lagos and any other state in the country.
El-Rufai said his administration’s focus was to enable the private sector to create jobs.

“We want to make Kaduna the state of choice for investment ,” he said.
“We have been able to facilitate these investments by the creation of a one-stop shop called the Kaduna Investment Promotion Agency, chaired by the Deputy Governor, with His Royal Highness, the former Emir of Kano, Sanusi Lamido Sanusi, as the Vice-Chairman, and our commissioners as members, to operationalise and ensure the implementation of our Ease of Doing Business Charter.”

The Governor noted that in 2014, Kaduna was ranked by the World Bank as the 24th state, out of 36 states and the FCT, in the Ease of Doing business metric.

He said the summit is designed to showcase Kaduna, “to show our progress on an annual basis, and attract investors.