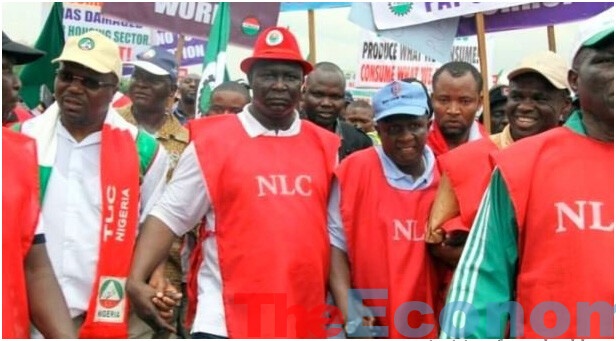 The Trade Union Congress (TUC) and Nigeria Labour Congress(NLC) have vowed to embark on a nationwide protest on Monday, September 28 to protest recent hikes in fuel prices and electricity tariff.

The TUC, in a statement by its President, Comrade Quadri Olaleye and Secretary-General, Comrade Musa-Lawal Ozigi, appealed to Nigerians to get ready for the “unprecedented mass action against corruption, obnoxious policies, rape and other violent offences, breach of Collective Agreement, unemployment, etc.”

The National Executive Council of the NLC endorsed the decision of the Central Working Committee to proceed on strike on Monday.

It noted the decision by government to increase petrol and electricity tariff must be challenged by workers, civil society groups and other labour centres.

The NEC took the decision at the end of a meeting with members of the National Administrative Council, President and General Secretary of members of the affiliate unions and our state council chairpersons and secretaries of the 36 states and FCT in Abuja.

President of the NLC, Comrade Ayuba Wabba, who read the communique of the meeting to reporters, said: “NEC resolved to reject in its entirety the issue of hike in electricity tariffs by almost 100 per cent as well as the fuel price increase in the name of full deregulation.

“This decision is premised on the fact that these twin decisions alongside other decisions of government including the increase of VAT by 7.5 per cent, numerous charges being charged by commercial banks on depositors without any explanations will further impoverish Nigerian workers and citizens,including their families.

“Therefore, this increase, coming in the midst of the COVID-19 pandemic, is not only ill-timed, but it is also counterproductive.

“NEC also observed that the privatisation of the electricity sub-sector seven years down the line has not yielded any positive result, whereas, the entire sector was sold at about N400 billion. We are also surprised that government within the last four years injected N1.5 trillion over and above the amount that accrued from this important asset. Therefore, NEC came to the conclusion that the entire privatisation process has failed and the electricity hike is actually a process of continuous exploitation of Nigerians.

“On the issue of the refineries and also the increase in the pump price of PMS, this particular issue had been on the table for more than three decades and the argument had not changed.

“Whether it is the name of full deregulation or subsidy removal, what is obvious is that it is fuel price hike and this has further eroded the gains of the N30,000 minimum wage because it has spiral effects which include the high costs of food and services and the reduction in the purchasing power of ordinary Nigerians.

“In the light of all of these, NEC thought that the issue of deregulation would be a continuous exploitation if it is import-driven.

“While demanding that our three refineries should be made to work optimally and then, it would benefit Nigerians, NEC also concluded that government has business in doing business because the primary purpose of governance is about the security and welfare of the people and if in other countries, governments are maintaining refineries, and they are working optimally for the benefit of the people, Nigeria cannot be an exception.”