Nnamdi KANU And The Biafran Case against Nigeria 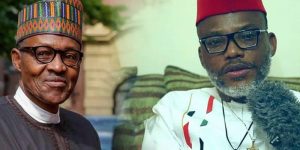 Most of my acquaintances who are not from the eastern part of Nigeria often asks me why there is so much anger in the east, especially amongst the Igbos. Some suggest that the widespread angst stems from the loss of the 2015 election by Goodluck Jonathan who the Igbos backed to the hilt with so much emotional and political capital.

The question include why the current generation of Igbos, with quantum support from other easterners are so angry as to contemplate to be now be taking concrete steps under Nnamdi Kanu on founding restoring Biafra?
It’s no longer in doubt that Nnamdi Kanu is a rising charismatic figure and his principled stance on referendum could conceivably lead to the restoration of Biafra, sooner than anybody can say jack. He’s even garnering supporters beyond the east to the Yoruba who are now pushing for Oduduwa and the Middle Belt that is beginning to see the duplicity of the one Nigeria they fought for in the Civil war.

Those not following Kanu may despise his gutsy rhetorics but are nonetheless sympathetic to his core message. And what is the message? That the east, especially the Igbos don’t feel wanted in Nigeria. That decades of institutional injustice should be halted and reversed or they would proceed to take their chances in a new nation. It’s great for Nigeria that Kanu has recommended referendum as the pathway. Still, it appears that some forces will rather have war than a dialogue inherent in a referendum.

For those who believe that the Biafran agitation is all about Jonathan losing Buhari, it is not, to be sure. Igbos and their cousins in the east were roundly disappointed that Jonathan lost. The relevant question to ask is this: Why did Ndigbo bet so much political capital in Jonathan, an Ijaw? The answer lies here: Nigeria has, without saying so, placed glass ceiling on any Igbo becoming president of Nigeria. Jonathan was the next best thing. Ndigbo chose Jonathan as their own “Igbo”. But that’s not to say that they are mad enough to levy war just because Jonathan was defeated.

Igbo angst has been smoldering in Nigeria since my infancy in the 70s. We all knew of the institutional redlines against Igbos before we were out of puberty. Soon after the war, official Nigeria made haste to exclude from the lucrative opportunities of Nigeria as a nation. The war reconstruction program was observed more in its wanton breach. The abandoned property abomination was introduced to drive a wedge between Igbos and their ethnic cousins in the former eastern Nigeria.

While the country was too embarrassed to officially acknowledge the discrimination policy, it was led threadbare for anyone who cared to look. It was evident in the Igbo police officer who stayed in one position while less qualifies juniors progressed to become his bosses. It was there when “sensitive” or “lucrative” positions were shared in Nigeria and Igbos were conspicuously absent. It was there when Igbos were only fit enough to be made minister of information until Obasanjo came to power. And even recently, it was there when Buhari appointed hundreds to man important offices in his government and none from the south-east was found worthy.

The Igbo political elite called it political marginalisation. Other Nigerians were wary. and uncaring. They felt to Re Kong that the Igbo cry of marginalisation is unique and different – it’s is official policy, it’s institutional and it’s stubborn. And occasionally, key government officials let it slip that Igbos should not complain. After all, they fought a war with Nigeria. And they were reminded of that at every turn, yet Nigeria found dubious comfort in pretending that such was not the case. Igbos were licking their wounds and complaining and the rest of Nigeria was too busy to notice until the coming of Nnamdi Kanu, who now went global by tagging along the entire eastern Nigeria, which had formed the former Republic of Biafra.

Go to the south-east today. Since the 70s, Nigeria has invested in industries across the nation, yet none has been situated in the Southeast and to a lesser degree, in the south-south. Much of the former Biafra, particularly the Igbo part was systematically de-industrialised by official policy. Even when it was the best location for any industry, there was always some dubious reason for choosing somewhere else. The immediate and everlasting impact that any Igbo that desired to work in a commercial federal establishment must leave the east to elsewhere in Nigeria but others don’t have to. Is that fair?

Then came the indigenisation policy of the 70s that excluded Ndigbo. It meant that international companies also avoided expansion into the south-east. This accounts for the mass exodus of Igbos to other regions that some in northern Nigeria have match on to be issuing quit notices to Igbos in their region. This is also why most Igbos became traders and commercial business men despite the famed Igbo knack fir academic excellence.

The only industries in the east are built by the sheer dint of the spirit of private enterprise of easterners themselves. And this has been the consistent practice since the end of the war. In addition to this, the federal government has systematically made it onerous for easterners to do commercial business even in the east. The federal roads and other infrastructures in the east are the worst in Nigeria.

It was like pulling tooth to get the Enugu Airport upgraded to an International Airport and it was only because a Jonathan was president and an Igbo, Stella Oduah was minister of aviation. The former finance minister, Ngozi Okonjo Iweala shed tears of joy and relief on the day the first international flight landed in Enugu. But what do we have now under Buhari? For over a year, Enugu airport has lost international status on a never-ending suspicious renovation works.

Recently, it was only the south-east that was shamefully missing in the new railway plan rolled out by the federal government. In case you forgot Nigeria has 6 geopolitical and economic regions.

And one (an important one, some say: the most important) was missing in a national railway plan. And this is happening while everybody knows that Igbos are the most itinerant in the country and would benefit most from a national transport plan. Even the presidency changed the plan to include Buhari’s village and Niger Republic (a foreign country) but a zone of the country was redlined. Why? If this is not injustice, I don’t know what else you can call it.

When you go to south-east, despite the lack of beneficial federal presence, the irritating presence of police all over the east tells the whole story. They mount myriad road blocks and make it burdensome for anyone to have commercial activity without the let and hindrance that other regions enjoy in ordinary course. Recently, the army has joined with abandon. It is everywhere.

The east is an occupied territory. They extort, they intimidate and they have recently started killing. And when they do, they quickly dismiss the victims as IPOB members as if that makes them less human. All these are happening while easterners are markedly and officially excluded from Nigeria’s security leadership and formations, including the ones deployed in their region.

To be sure, those who are still wondering why Ndigbo or the east is angry, you should wonder no more. While most easterners would not want to levy another war against Nigeria, don’t underestimate the level of disconnection and anger that is running riot, particularly amongst the youths of the region. Nigeria is comprised of disparate nations or autonomous regions that reluctantly agreed to form a country in 1960. It was experimental and it seems not to be working, especially against the east. No region will like to be under the perpetual domination of others, as it now seems that a minority group in the north has seized much of Nigeria’s opportunities.

There’s enough illustration of the bludgeoning resistance when Nnamdi Kanu’s followers starred down military tanks with nothing. The truth is that there are now fiercer and angrier Kanus rising in the streets to challenge this and it is about to engulf Nigeria in a new conflict that will be greater than Boko Haram and the past civil war put together. You cannot be mouthing and sloganeering unity and indivisibility of Nigeria but all your actions point at official mistreatment of certain components of the country.

History has shown that you cannot ensure peace by mere fiat and there’s never peace without justice. Justice must come before peace. The unity you seek, you cannot decree it and you cannot compel any group to belong to a country by force while still treating their members like conquered people. It may work for a while, but it is never sustainable in the long run.

And this, my people, is the whole essence of Nnamdi Kanu, IPOB and the Igbo-Biafran case against Nigeria. It’s a case you can’t solve by over-deployment of military to the east or arm-twisting their governors to do your bidding.

Duncan Odey writes from Owerri and can be reached via duncanodey@gmail.com
#Igbohistory