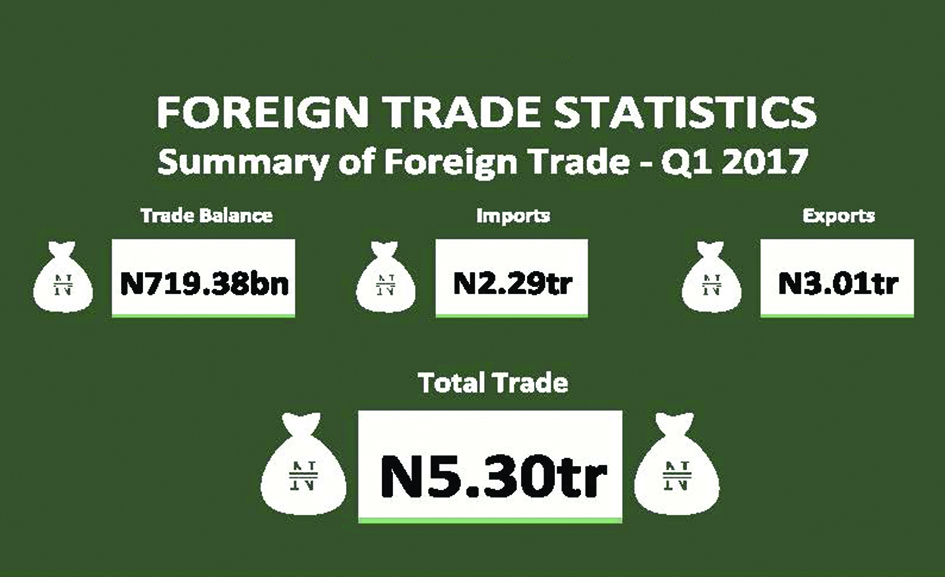 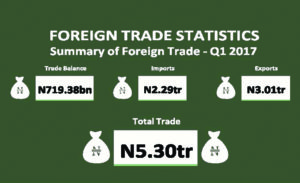 Nigeria’s foreign trade balance improved in the first quarter of 2017 after shelling out N5.30trillion in trade, according to data recently released by the National Bureau of Statistics (NBS). The figures show total export of N3.01trillion was up by 0.9 percent against the last quarter of 2016, surpassing total imports of N2.29trillion which went down by 0.92 percent in the period under review.

Though the figures painted a mixed picture of the external sector, overall, the country earned more foreign exchange from exports compared to what it spent on imports. Agriculture goods imports dropped by 1.9 percent while exports of same commodities increased by 82 percent. Raw material imports nosedived by 11.3 percent which is better than the 25 percent reduction in export of the same commodity. The export of solid minerals climbed by 2 percent while its import dropped by 15.7 percent. Nigeria’s quest to diversify its economy is paying off as manufactured goods export increased by 45 percent.

Crude oil as usual dominated total receipts, accounting for about N2.37trillion of the N3.01trillion earned while non-crude oil and non-oil exports accounted for the balance. As leaders across the globe tinker with protectionism, Nigeria has continued to improve trade with others as trade increased by N2.17trillion between the first quarters of 2016 and 2017.