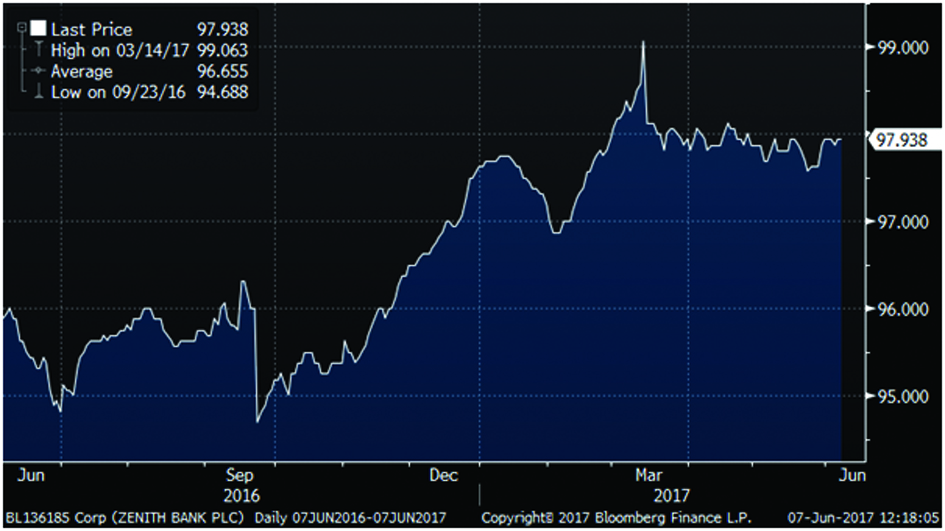 Nigeria’s quest to attract foreign investment received a boost following the recent oversubscription of Zenith Bank’s $500million Eurobond. The five-year unsecured benchmark Eurobond which was issued on the Irish Stock Exchange broke new grounds as it was 400 percent oversubscribed.

A statement by the bank’s management said the issue was in addition to its existing $500 million Eurobond, which matures in April 2019. Subscription to Zenith Bank’s latest Eurobond 2022 issue was $2.1 billion and recorded landmark success on three counts: pricing, subscription and global appeal. The subscription makes it the highest by any non-sovereign and non-supranational company in sub-Saharan Africa, the bank says.

According to the bank, the bond was issued at par with both coupon rate and yield to maturity rate priced at 7.375 percent.

The 7.375 percent pricing is 50 basis points better than the sovereign (Nigeria’s Eurobond) of 7.875 percent. The rating of both the sovereign and Zenith Bank is B+ with the bond issue also rated B/B+.

“The 400 percent oversubscription indicates a huge endorsement of the Zenith brand as a reputable, international financial institution recognised for superior performance and creating premium value for all stakeholders,” said the bank’s management.

The bond opened trading at 101.15 percent of par value on its first day of trading, indicating the huge demand for the issue in the market.

Subscription came from around the world, including Hong Kong, China, Singapore, Europe and the United States of America, to further affirm the global acceptance of Zenith Bank as an international brand. Over 200 investors participated, with the largest single ticket subscription being over $100 million.

They pointed at the overwhelming success of the issue as attesting to the visionary leadership of the institution and the consistent excellent track record of the bank over the last 26 years.

The bank established $1 billion Global Medium Term notes in 2014, with $500 million already raised in the first tranche. The first tranche notes were listed and admitted to trading on the Irish Stock Exchange in 2014.

The net proceeds of the second tranche notes would be utilised for its general banking business.
Zenith Bank, which has Peter Amangbo as its Managing Director/Chief Executive Officer, has consistently recorded good ratings from both local and international agencies. The ratings are supported by its leading market position in all key performance indices.

Zenith is adjudged the largest bank in Nigeria by Tier-1 capital, and has also earned recognition in other areas of operations, including Best Bank in Corporate Governance, Best Customer Service Bank in Nigeria, and Most Customer-focused Bank in Nigeria.

Its shares are currently being traded freely on the London Stock Exchange (LSE), following a listing of $850 million worth of shares by way of GDR.
With operations in Nigeria, the United Kingdom, Ghana, Sierra Leone, Liberia, China and South Africa, Zenith Bank stands out in the banking industry for its superior service quality, unique customer experience and sound financial indices.

In 2004 when the bank listed on the Nigerian Stock Exchange (NSE), its shares were oversubscribed by over 500 percent and the oversubscription of the Eurobond is a clear affirmation of the bank’s acceptance as a very strong international financial super brand.