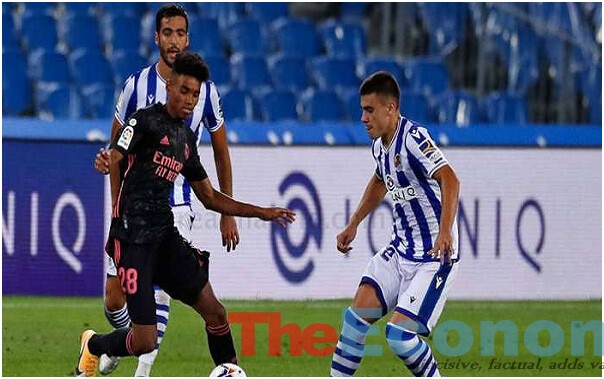 Nigerian descent Marvin OlawaleAkinlabi Park made his debut appearance for Real Madrid first-team in their goalless draw against Real Sociedad in their La Liga opening fixture on Sunday.
He replaced Rodrygo in the 70th minute of the encounter but could not inspire the defending champions to victory at the Reale Arena.

The 20-year-old was the second player who made his Real Madrid debut in La Liga on Sunday after Sergio Arribas came on for Vinicius Junior.

Marvin moved to the Spanish capital in 2016 and rose through the youth ranks at the Real Madrid after previous playing stints at Tranmere Rovers, Ciutat de Palma and PenyaArrabal.

He helped the Spanish giants lift the UEFA Youth League title last season with his contribution of a goal in seven matches, and he also scored three goals in 26 league appearances for Real Madrid Castilla.

Internationally, the youngster is eligible to play for three countries after he was born to a Nigerian father and a South Korean mother in Spain.

In January 2019, Marvin earned his maiden invitation to Spain U19 team and featured as a 62nd-minute substitute in their 3-0 defeat to Italy U19 in an international friendly.

After Sunday’s outing, he will be eager to earn more first-team action with the Santiago Bernabeu outfit in the 2020-21 season.

Real Madrid will be hoping to secure their first win of the season when they visit Real Betis for their next La Liga game on Saturday.