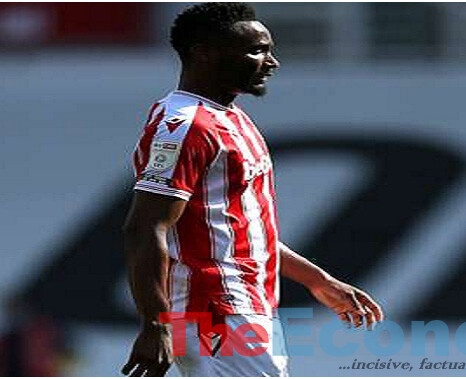 The former Chelsea star, who signed for the Potters in August after mutually parting ways with Trabzonspor, made his debut against Millwall.

In the game staged at the Den, the 33-year-old saw every minute of action as Michael O’Neill’s men settled for a 0-0 draw away from home.

Against the Robins at the Bet365 Stadium, Mikel held sway in the hosts’ midfield, albeit, they ended on the losing side courtesy of Nahki Wells and Andreas Weimann’s efforts.

The visitors started the game brightly and almost opened the scoring after six minutes, after Wells seized Sam Clucas’ back-pass but Adam Davies raced off his line to deny the striker from pulling the trigger.

Dean Holden’s men continued to dominate with Andreas Weimann firing over the crossbar when inside the box, with his long-range effort from Jack Hunt off target.

Their dominance paid off as they took the lead in first-half stoppage time through Wells courtesy of Chris Martin’s assist.

Despite the introduction of Steven Fletcher and Tyrese Campbell in the 65th minute, the Potters laboured in vain to get the equaliser.

In the 83rd minute, Fletcher backheeled the ball into the path of Tommy Smith who saw his curling effort from 16 yards flicked over the bar by Daniel Bentley.

Wiemann wrapped up the victory with a simple close-range finish following a defensive blunder by the hosts.

While Mikel was in action from start to finish, Senegal’s BadouNdiaye was not listed for action, nor was Cameroonian goalkeeper BlondyNnaNoukeu.

“We are very disappointed with the result obviously,” Stoke City boss O’Neill told the club website.

“We didn’t start the game particularly well, we gave the initiative to the opposition.

“There was then very little in the game, but we concede a poor goal right on the stroke of half time, and then obviously we concede another right at the end of the game through a defensive error.

“We were not good enough on the ball today and we have to be better than we showed today.

“It’s a reality check for us. We are a work in progress and today certainly showed that.”

Mikel and his team would be seeking for redemption when they take on Preston North End on Saturday. Before then, they tackle Gillingham in a League Cup clash on Wednesday.